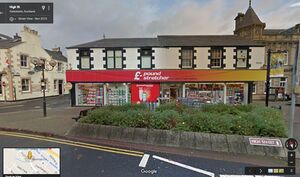 Currie was born in 1846 in Galashiels, Scotland. [2], to ? Currie and Christina Currie.

His hometown was a centre of wool manufacturing, and his mother was employed in this trade.

Woollens are manufactured chiefly in the valley of the Tweed, at Galashiels, Hawick, &c.

— New Canadian geography, specially adapted for use in public and high schools, 1899 [3]

1849-53 saw three outbreaks of cholera in the town due to the then inadequate water supply and sanitation. [4]. These outbreaks may have killed his father, who is not present with the family by 1851.

On 30 March 1851 he appears in the UK census as being five years old and as the son in a residence with one Christina Currie as the head of the household, a lodger, Mary, his aunt, Irene, his sister, and Walter, his brother.

At age 19, he married Mary Riddell in 1865 in Selkirk, Scotland. This marriage appears in the records consulted by his great-grandson, family genealogist Bill Currie.

John's first son Walter was born 21 August 1868. This son appears appears to have been named after John's elder brother, also named Walter, who appeared with John in the 1851 United Kingdom census.

According to his obituary, he had six children who survived infancy:

Another child, Jessie, (1896-1980) is listed in Grace's obituary as being her sibling, and in his wife Mary's as being her daughter. Jessie was likely born out of wedlock to one of John's children. The 1911 census lists her as a grandchild, born April 1896. At the time, Walter was married since 1893, but John would have been 17, Christena 23, and Mary 15. Christena is therefore the likeliest to be the true mother.

Almonte, Canada had an abundant supply of wool and available waterpower, leading to it become a centre of wool milling just as his homeland of Scotland was. He was likely recruited as a skilled labourer to come to Canada, with the incentive of a higher salary or better working and living conditions for him and his family. 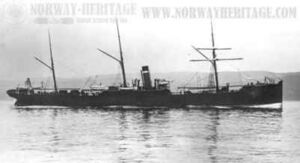 He emigrated from Scotland directly to Almonte, Canada with his wife and four young children in 1883.

John, his wife, and his four children at the time - Walter, Christena, John, and Mary - boarded the S.S. Corean [5] from Glasgow, and after stops in Liverpool and Queenstown, docked in Québec on 8 June 1883, exactly 99 years before Michael Currie was born.

They immediately made their way to Almonte, where John took up a job at Rosamond Woolen Company. Two or three further children were born in the coming years: Grace, Alex, and his possible daughter Jessie.

The 1911 census started 1 June, only days before John's death. At the time the census officials visited, John was living with only Mary, Grace, and Jessie. Grace and Jessie had already taken after John and all three were working at the woolen mill.

In Almonte, John worked at the Rosamond Woolen Company until just before his untimely death. 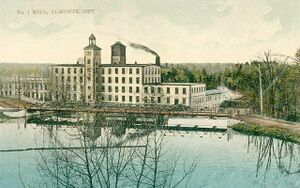 Rosamond Woollen Mill was built in 1866 to manufacture fine tweeds. Milling emerged as a major manufacturing industry in Canada between 1840 and 1870. Mills were built in the Mississippi Valley, where waterpower, labour and wool supplies were abundant. James Rosamond built mills at Carleton Place and Almonte in the 1840s and 1850s. His sons, Bennett and James, began the large Almonte mill in 1866, in partnership with George Stephen of Montréal. Subsequent expansion of the mill continued until the early 1900s. The textile mill was a functioning industrial complex until 1986.

— Historic Sites and Monuments Board of Canada, Minutes, June 1986.

John's obituary reported that he was actively involved with the International Order of the Freemasons (IOF) as well as the Sons of Scotland (SOS). 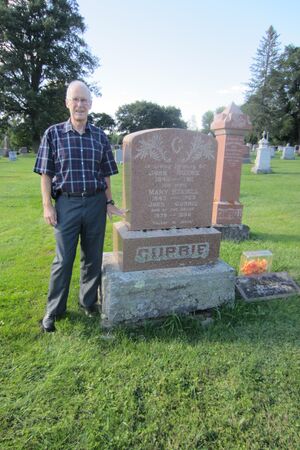 Currie died suddenly at the age of 65 of tetanus [6] on Sunday 4 June 1911 in Almonte. He was at work Friday 2 June, but in the afternoon returned home with a pain that developed into lockjaw. He finally died on Sunday afternoon after "many hours of intense suffering".

His tombstone was at some point repaired by Neill Currie, according to Bill Currie.

It seems scarcely possible to realise that a week ago Mr. John Currie was about his usual avocation, and apparently enjoying his customary good health, and that today his spirit has returned to Him who gave it life and all that was mortal has been consigned to the grave.

Mr. Currie went to work Friday morning but returned home during the forenoon suffering from what developed into lockjaw, and on Sunday afternoon he passed away after hours of intense suffering. When the doctor diagnosed the trouble he immediately communicated with a specialist, and an effort was made to procure the anti-toxin treatment, but Saturday being a holiday some time elapsed before it could be had, and when received the disease had developed so far that the desired results could not be obtained.

The late Mr. Currie was born in Galashiels, Scotland [7], where he spent his life until twenty-eight years ago, when he came to Canada, coming direct to Almonte where he has since lived continuously, and during which time he had been continuously in the employ of the Rosamond Woolen Co. [8]

At Selkirk in Scotland he was married to Mary Riddell, who with the family is left to mourn the loss of one who, loving and appreciating his home, was a husband and companion.

Ten children were born to Mr. and Mrs. Currie, four of whom died in infancy, and one, John, about twelve years ago. Those living are Walter at Worcester, Mass. ; Christena (Mrs. Ed. Lemaistre) Almonte ; Mary (Mrs. R. J. Neil) at Arnprior ; Alex., at Gravel, on the C.P.R., and Grace and Jessie at home. There are also thirteen grandchildren.

The funeral took place on Tuesday to the eighth line cemetery, under the auspices of the I.O.F. and S.O.S., in both of which the deceased was an active member. Rev. C. H. Daly also conducting services at the house and at the grave.

The late Mr. Currie was a man of a quiet disposition, but of a sterling character which won for him warm friends and high esteem. He was a member of St. John's church, sincere and consistent in his walk and conversation. He was a member of the Sons of Scotland as well as of the I.O.F., and in both of these he held positions of trust, discharging the duties thereof with the same promptness and exactness that characterized his actions in other phases of his life.

His life was a quiet and unostentatious one, but one of the kind most valued and most missed. Much sympathy is felt for Mrs. Currie and the family in the bereavement that has so suddenly fallen upon them.

John Currie is the font of three major branches of descendants:

Despite these three branches, the Currie name lives on in North America solely through the Manitoba branch founded by Alex. However, thanks to his many children, the Currie name is as of 2018 carried by six males likely to have issue:

Historic Sites and Monuments Board of Canada, Minutes, June 1986.

Retrieved from "https://curriepedia.mywikis.wiki/w/index.php?title=John_Currie&oldid=321"
Cookies help us deliver our services. By using our services, you agree to our use of cookies.