She was the wife of Alex Currie.

Anna Snook's birth in Port Arthur on 21 July 1893 was quite eventful:

Another story, Grandma Currie’s version, is that when she was born, they thought she was stillborn and set her out in a shed. Someone heard her crying and brought her back in.

Her birth was not registered at the time, but in March 1931 papers were filed for some reason to register the birth, with one Elizabeth Wooker (born circa 1868) attesting that she "was a near neighbour and intimate with the family, and although not present at the birth I saw the child within three days after the birth and was informed that she was born at the place and on the date aforenamed." This document, created when Anna was 38 years old, gives her name as "Hannah (Anne) Bryant Snook".

Sometime between 1911 and 1921, her mother also adopted another daughter, Lillian Snook, who was 10 years younger than Anna.

Grandma Anna was noted by younger generations (such as her son Jack's sons) as having a "strong" personality. When she was relating an anecdote, for instance, all others in the room were expected to be silent and to listen attentively. She also had cataract surgery at some point so her later years gave her a piercing look with her extremely strong glasses.

In the recollection of his parents as told to him on 28 May 2018, infant Michael was taken to Winnipeg to meet Grandma Anna in June or July 1982 when he was just weeks old, and a picture was taken.

In another recollection in August 2019, Ron suggests that actually Grandma Anna was at Surprise Lake and Ron remembers rounding the corner on the deck in late June 1982 introducing Michael to her.

The next year, perhaps on the occasion of her 90th birthday, Michael made the trip to Winnipeg and met her a second time.

She spent the last years of her life in a home, and was not in a vivacious condition. There was at least one later occasion where Michael's father visited Grandma Anna, but Mary Ann didn't attend, and so likely Michael did not either. It's likely he only ever met his Great Grandmother Anna those two times.

In 1974, at age 81, she moved to Middlechurch Home, a Long Term Care Facility in Winnipeg, where she would spend the rest of her life.

According to Ron Currie, by the early 1980s she had a boyfriend, "Mr. Bear", who was likely in his mid-90s. The family found this cute.

Her health took a sharp decline around 1983, leaving her unable to receive guests other than immediate family, or travel.

Her death unfortunately came just days before her son Jack's 50th wedding anniversary with Jack's wife Lucy, which was celebrated at a formal dinner at the Valhalla Inn and then a reception at their home on Surprise Lake, outside Thunder Bay, Ontario. Michael Currie as of 2018 has a memory of debating with his sister in the back seat of the car on the way home from Surprise Lake what the age of his only living "great grandparent" was: 98, 99? And how his mother, Mary Ann, had to delicately tell him that in fact Great Grandma Anna had died just days earlier. 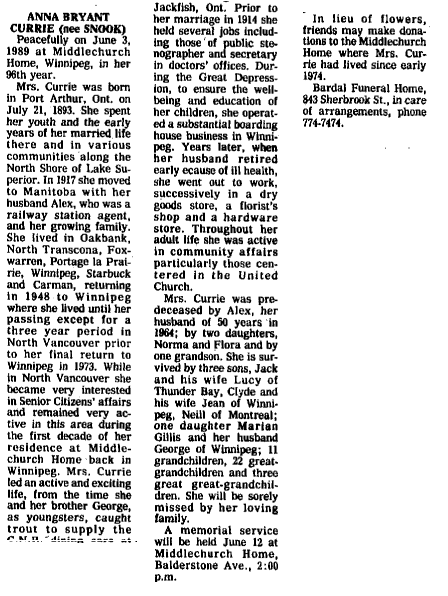 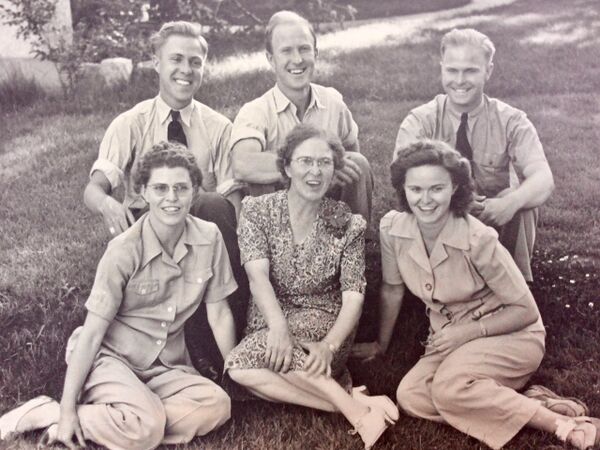 Anna Currie and her then-living children, circa 1945
Retrieved from "https://curriepedia.mywikis.wiki/w/index.php?title=Anna_Currie&oldid=1009"
Cookies help us deliver our services. By using our services, you agree to our use of cookies.