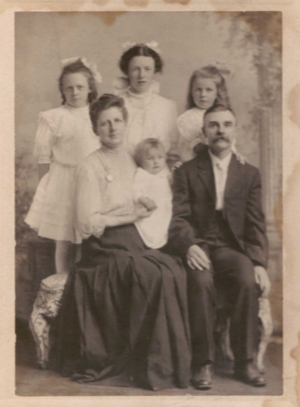 Walter Currie and his family, circa 1908

Walter Currie (22 August 1868 - March 1954) was a Scottish-Canadian-American who worked in the wool industry and had six daughters.

He spent his first 14 years in Scotland, lived in Canada until age 36, and lived the rest of his life in America until his death at age 85.

In the Scottish census of 1851, a 13-year-old Walter Currie appears with his 5-year-old brother John Currie as living in a house headed by a 38-year-old Christina Currie. That would put this elder Walter as having been born in 1838. Therefore it appears that Walter Currie 1868, the subject of this article, was named after his uncle.

Currie was born 22 August 1868 in Scotland, to John Currie and Mary Riddell.

At 14, he, his parents, his brother and two sisters boarded the S.S. Corea in June 1883 to emigrate to Canada. 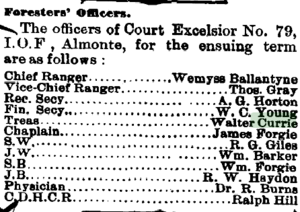 On 3 Feb 1893 a Walter Currie appears in the Almonte Gazette as treasurer of the masonic lodge #79. He was 24 at the time. 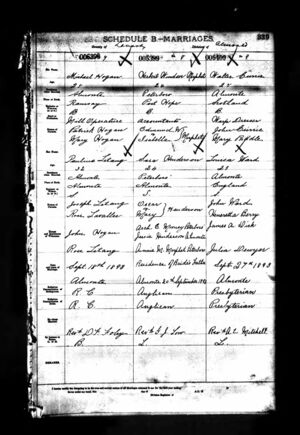 With Louisa he had six daughters:

It's likely their first two daughters were named after their maternal and paternal grandmothers, respectively.

According to the Canadian census of 1901 he was still living in Almonte, with a religion of Presbyterian, and his occupation as Warper Wheit.

He emigrated to Worcester, Massechussetts, USA in 1905 with his wife and children, likely to take a job at a mill there.

By the time of the 1910 census he is an "overseer" in a woolen mill in Worcester. His 81-year-old father-in-law was living with them, and listed as blind and deaf/dumb.

He's listed in the 1920 American census his occupation is listed as Dressentinder, in the Woolen Mill industry, with a rented home, he had just moved into in 1920, on Colton Street, in Worcester Ward 5, Worcester, Massachusetts.

In 1930, he's living on Southbridge Street, Worcester, with his wife and Grace, Gene, and Ruth. He, his wife, and Gene are unemployed, but his daughter Grace is an assembler at a machine shop, and his daughter Ruth is a clerk at a telephone company. The woolen industry was evidently in severe decline by this point.

His wife died 28 September 1930, according to the Worchseter Directory, page 634.

On 17 July 1931, the Almonte Gazette reported that he returned to Almonte to visit his sisters Christena and Grace:

Mr. Walter Currie of Worcester, Mass., is visiting with his sisters, Mrs. Edward LeMaistre and Miss Grace Currie at present.

My dad (Jack Currie) did refer to him as “Uncle Wattie” although I never did ask if he (Dad) had ever met him (Walter). 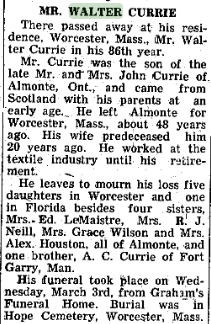 Retrieved from "https://curriepedia.mywikis.wiki/w/index.php?title=Walter_Currie&oldid=1263"
Cookies help us deliver our services. By using our services, you agree to our use of cookies.