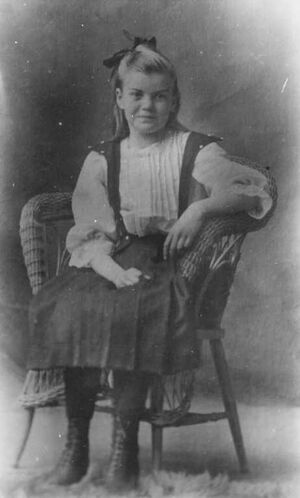 Thus, Jessie was likely born out of wedlock to one of John's children. At the time, Walter was married since 1893, but John would have been 17, Christena 23, and Mary 15. Christena is therefore the likeliest to be the true mother. 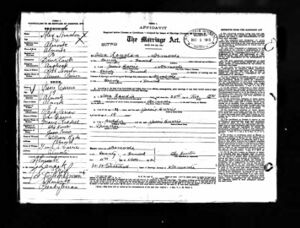 A description of the event appeared in the local newspaper:

Houston-Currie. At the Presbyterian manse on Wednesday evening of this week, at 7 o'clock, Miss Jessie T. Currie was united in marriage to Mr. Alex. Houston, son of Mr. and Mrs. Robt. Houston, Rev. S. G. Brown performing the ceremony. The bride was dressed in cream serge with shadow lace blouse, and was attended by Miss Grace Currie as bridesmaid, Mr. Wm. Ryder being groomsman. After the ceremony the wedding party, accompanied by a few of the near relatives, motored over to the home of Mr. John Ryder, New England, where the wedding supper was partaken of, and a few hours spent in social intercourse and merriment. Among the gifts received was a rocking chair from the bride's co-workers in the knitting mill. Sincere good wishes for future happiness and prosperity are extended by their friends and well-wishers. 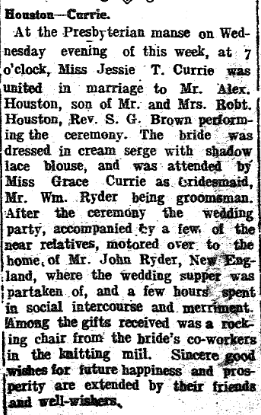 According to Marilyn's obituary, Jessie had two "daughters", although only Marilyn was a biological one: 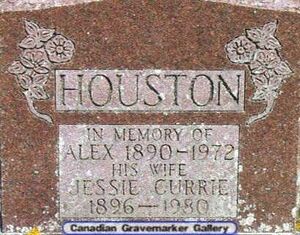 Just months after the early death of her only biological daughter, she died in 1980.

Retrieved from "https://curriepedia.mywikis.wiki/w/index.php?title=Jessie_Houston&oldid=1189"
Cookies help us deliver our services. By using our services, you agree to our use of cookies.