Pine Street School (1920 - 1994) was a two-storey, three-level elementary school on Pine Street in Thunder Bay, Ontario that opened in 1920. It is set just north of the Mariday Park neighbourhood that had just been opened for development in 1910.

Pine Street School was expanded in 1945. It closed after the school year ended in June, 1994, and demolished in December 2002. It had about 15 classrooms, a library, a gym, and a cafeteria. It was located on a very large 2.8-hectare plot of land.

About 400 children attended at any given time, for about 25 children per class, and a staff of about 15 teachers, a principal, psychologist (Mrs. Marion Paularinne in about 1990), secretary, crossing guard at Red River Road, and custodian, plus about two lunch-time volunteer supervisors, for a total of 22 staff. Over its 74 years, it educated about 25,000 person-years worth of students. Assuming the average student stayed for eight years, that means it educated about 3,200 distinct students. Assuming the average teacher tenure was 20 years, it had a total of 80 distinct staff work there over the years.

Until about 1990 the school also hosted mentally disabled children in one special classroom in the basement. 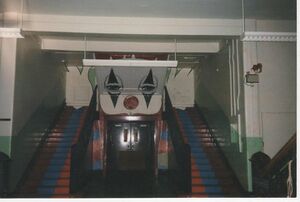 Clown Stairs as seen from the first floor, photographed after the school was closed, in about 1998

Before Christmas, the children would gather on the slopes of "The Clown", to sing Christmas carols. "The Clown" was painted in approximately 1990 on some of the unused stairs in the centre of the first floor.

With the creation of the Mariday Park neighbourhood in 1910 and more generally the massive increase in the population of Port Arthur, new schools were needed.

Pine Street School was built in 1920 as an elementary school, part of the Lakehead Board of Education (known as "English-language Public District School Board No. 6A" until 1999 according to Wikipedia).

It was set on a huge plot of land bounded by:

On the north side of the lot, facing Carrie Street, there are ten private houses bisected in the middle by a small cul-de-sac from Madeline Street. 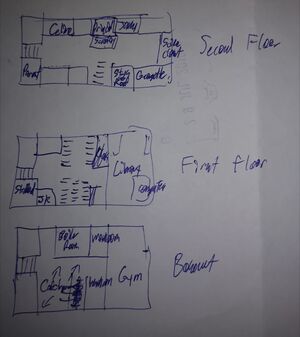 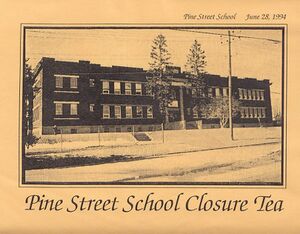 There was a controversy about rezoning the land for a seniors' home in 1997 and 1998 and the land was put in the market again in 1999. It was finally approved for redevelopment in early 2002. 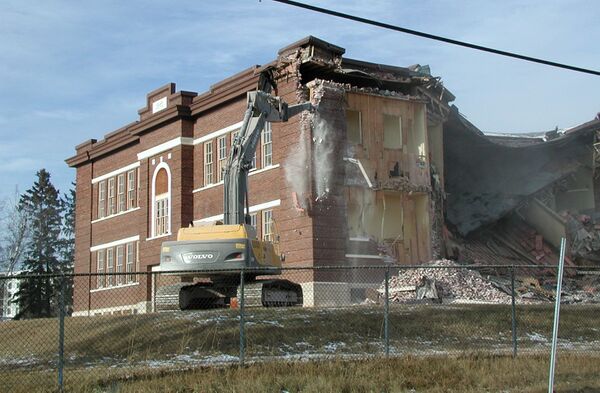 After sitting vacant and boarded up for many years, it was torn down in December 2002. Soon afterwards, the following was built on the site:

According to Katrina O'Neill, the executive director at St. Joseph's Foundation, "during the entire 32 years it ran we raised $1,175,454 for Bethammi Nursing Home." [3]

Benny Birch's first birthday celebration was held in June 1982. [4]. This was in fact the same birthday as Michael Currie. But since this was counted as Benny's "first" birthday, he was always billed as a year older than Michael.

Benny Birch was discontinued by St. Joseph's care group, with the last celebration, the 33rd, in June 2014 at Chippewa Park. The celebrations spanned 32 years, for 33 distinct events.

"Who didn't see that coming worst thing they did was move it to Chippewa." - Mike Boyechko

"It kept getting smaller and smaller. And more expensive. Then the long drive out to Chippewa. Too bad. It was fun, once upon a time." - Tasha Bee

Anyone have pictures of Benny Birch's Birthday? Or remember the year where we collected all the pellets from the air guns and put them in our desks? The teachers were probably stunned and confused as to why our desks were filled with little, dirty, metal balls... I'm not really sure why we collected them either... I'm sure it all started with Zan Lod. 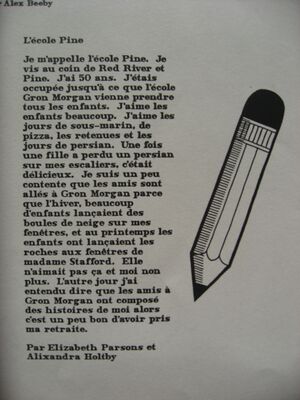 A poem on Pine Street School, circa fall 1994, by Alix Holtby. The poem makes the mistake of assuming the school's age is 50 years (likely using the stone dated 1945 from the addition). In fact the school was 74 at the time of its closing.

Man, I miss that school. Remember the awesome basement with the cool space under the stairs? And climbing the pipes in the boys' washroom? We used to make a game of sneaking inside during recess when the teachers weren't watching so we could play down there.

Gary mauno is a hero. Best janitor ever. Mike and matt c - do you guys recall when we got into his office in grade 5 or 6 and he showed us where the pipes go? Sounds dirty but it was totally legit because he was a great guy. It was just some narrow passageway from his office to some other area. 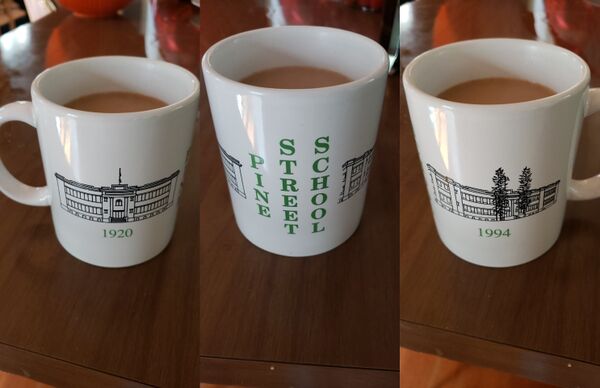 Pine Street School Mug, still in use circa 2019, by Dylan Gerow

The students and faculty of Pine Street School were moved en masse in September 1994 to nearby Ecole Gron Morgan Public School.

As of 2019 the Lakehead Board runs 23 elementary schools, of which three offer French Immersion: 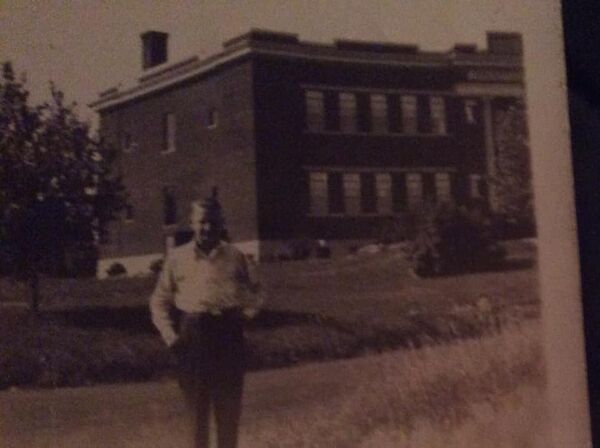 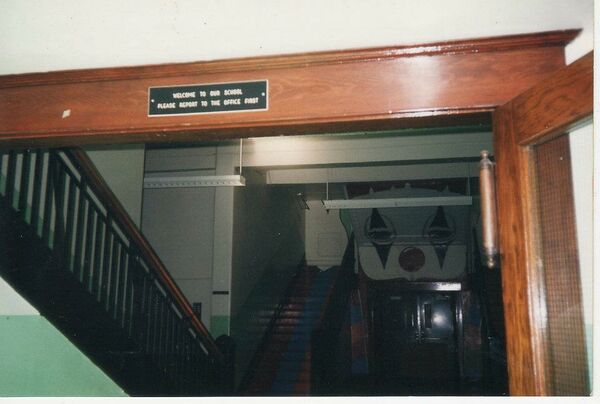 Clown Stairs, another view. Taken by Tyler K. Rauman after breaking in circa 1998. 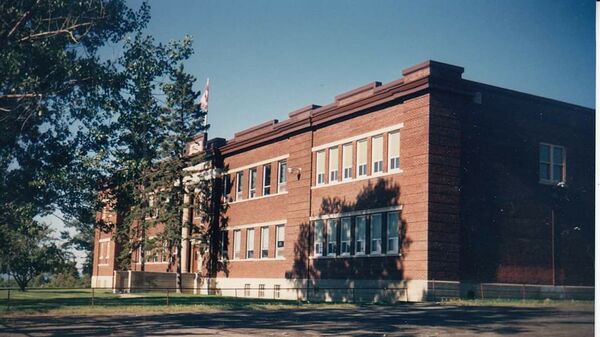 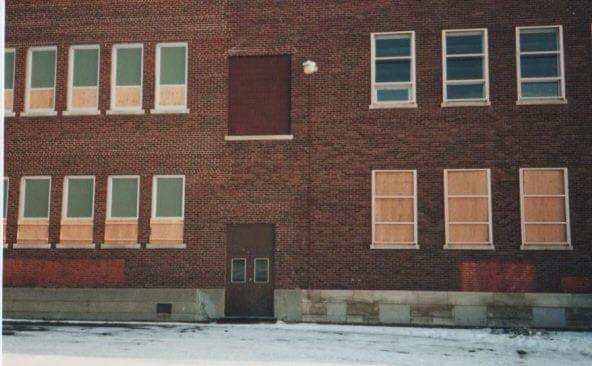 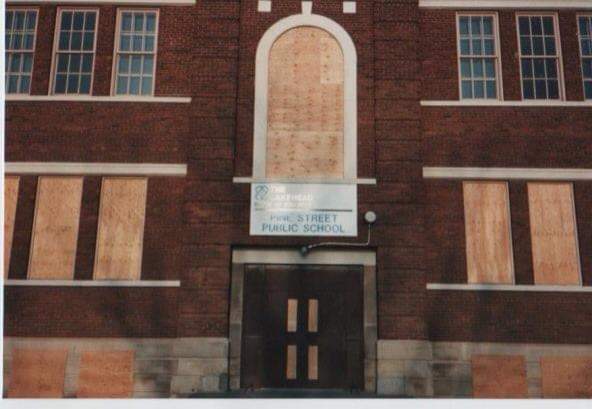 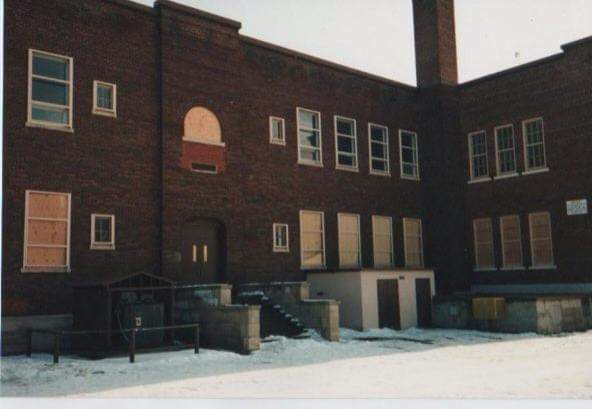 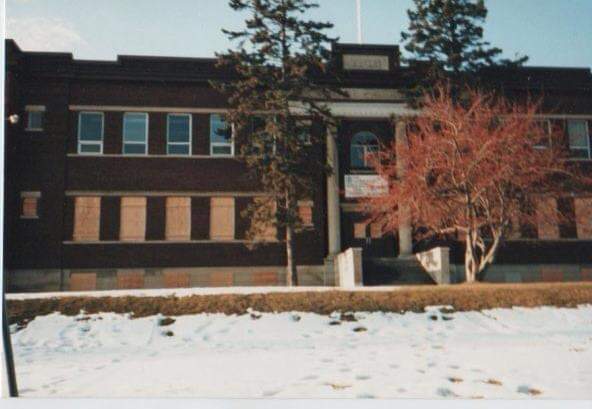 Retrieved from "https://curriepedia.mywikis.wiki/w/index.php?title=Pine_Street_School&oldid=7837"
Cookies help us deliver our services. By using our services, you agree to our use of cookies.