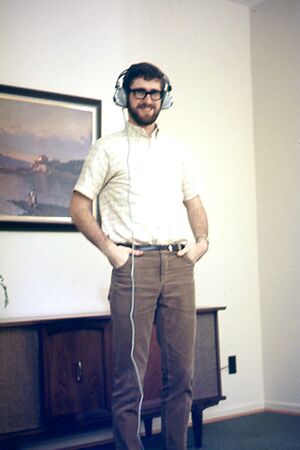 Currie was born in Winnipeg, Ontario on 5 October 1947, to Jack Currie and Lucy Currie. His grandparents had much larger families than what was typical in subsequent generations. Excluding self and siblings, whereas his son Michael has only 4 paternal and 8 maternal cousins, Ron has 9 paternal and 10 maternal cousins, 58% more. 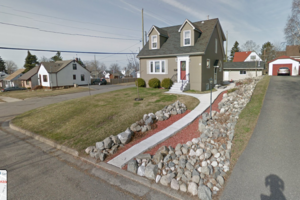 In 1954 his family moved to Port Arthur. He attended Pine Street School for elementary school, and lived in a rented home at 50 McKibbin Street, in Mariday Park. In fall 1961, he took Grade 9 at Port Arthur Collegiate Institute [1].

Currie's father Jack was employed as a heating oil salesman, but with the natural gas pipeline having recently been completed, it was clear that the added safety and lower cost of natural gas would lead to its replacing heating oil in all houses.

At some point prior to 1962 Jack jumped ship and moved to become a natural gas salesman. In the early summer of 1962, the natural gas company assigned him for some reason to North Bay, so the family gave up renting the 50 McKibbin Street Home that Ron lived in from ages 7 to 15, and they moved to North Bay. That summer, Ron had a great time. That summer and the following school year he spent a lot of time with Edwin Snook's son and that son's friend, and he also studied and completed his Grade 8 piano, and joined the high school band, playing flute. Ron was completing his Grade 10 school year.

The following summer, in 1963, the family moved back to Port Arthur, living in a rented home 1 block south of Bay Street on Hill Street South. Ron presumably rejoined PACI in the fall for his Grade 11 school year. He didn't really ever see the Edwin Snook family again after that one year in North Bay.

After completing Grade 13 in June 1966, he enrolled in Victoria College [2] at the University of Toronto [3].

After graduating university with a degree in Chemical Engineering in Spring 1971, he took a trip from Feb 1972 to Feb 1974 around the world, visiting Asia, Australia, and other countries, making lifelong friends along the way.

Upon his return he took teacher's college at Lakehead University and became a special education teacher.

Currie graduated from Victoria College at the University of Toronto, in Chemical Engineering. He worked summers during university as a labourer in Thunder Bay in order to pay his way through school.

He failed 3rd year so finished in five years, graduating May 1971. He then spent about six months working as a labourer.

He embarked on a tour of the world, passing through such places as Asia and Australia, from February 1972 to February 1974.

He received a job offer as an engineer around this time (1974), at the paper mill in Smooth Rock Falls [4]. He even travelled to Smooth Rock Falls for the interview. But he decided not to take the job and instead enrolled in Teachers' College at Lakehead University, starting in September 1975. He worked as a labourer until starting Teacher's College.

He began his teaching at the Special Education department of Sir Winston Churchill High School in Thunder Bay in September 1976, age 28.

It was at this school where in about 1979 he met and began dating his future wife, Mary Ann Newman, who had accepted a posting to teach home economics. They married in August 1981. In the 1980-1 and 1981-2 school years, they were in a long-distance relationship as Mary Ann studied for her law degree at Western University in London, Ontario.

In about July 1982 they moved into their newly-purchased home at 71 South Hill Street, Thunder Bay. They purchased it from Ron's mother's bridge-playing friend, Chris Harrison.

He opted to switch to teaching Mathematics around 1984, which prompted a switch to neighbouring school Hammarskjold High School.

He took a sabbatical for the 1987-8 school year to live with his young family in Dijon, France to learn French. Upon his return he started teaching mathematics in French in addition to English.

On Monday, 27 October 1997, he, along with all Ontario public secondary school teachers, was compelled by his union to participate in a strike for two weeks in protest of Bill 160, which enabled the Government of Ontario to take control over curriculum and classroom policy from the school boards and unions. [5] He returned to work along with his colleagues two weeks later, on Monday, 10 November 1997.

Currie taught his own son Michael calculus in 2000.

He retired from teaching at age 59, in June 2006, while still teaching at Hammarskjold. On his retirement, a tribute was posted to the school's website:

Mr. Currie--the entertaining oh so talented Math teacher who forever kept his students on the Math Quest! As we unleash this amazing man, we wonder if the world is ready for his wit and talents! Love you Mr. Currie.

In August 1981, on Manitoulin Island, he married Mary Ann Newman. Witnessing their wedding were just two people: Buzz and Linda.

They had two children: 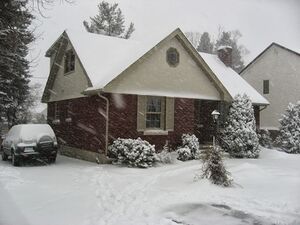 As of 2019 he continues to live in Port Arthur (since amalgamated as Thunder Bay), spending time at home and summers at his "camp" on Surprise Lake.

Ron Currie got a wintery welcome, arriving back in the city Friday night after a holiday trip to Dubai.

“Actually, I’m quite happy to get back in the nice white snow and relatively mild cold. It could be worse,” he said.

“It hasn’t even started up yet. Let’s hope we get a bit more snow.”

He did get one welcome home gift in the morning.

“I was really grateful to look out the window and see my neighbour getting most of the shoveling. He had already done half the driveway,” Currie said.

Retrieved from "https://curriepedia.mywikis.wiki/w/index.php?title=Ron_Currie&oldid=7928"
Cookies help us deliver our services. By using our services, you agree to our use of cookies.