Mariday Park shown on a map of Thunder Bay 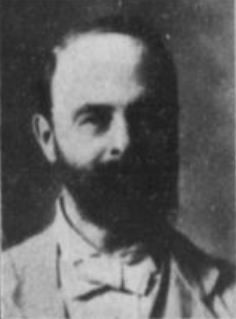 Alderman Daniel Francis Burk, the previous owner of the land

The land that became Mariday Park was previously owned from 1879 - 1909 by Alderman Daniel Francis Burk (1848 - 1917) [1]. Burk purchased the land of what would become Mariday Park in about 1879 for $2,500. Burk did not develop the land, instead holding it, speculating that the price would appreciate over time. 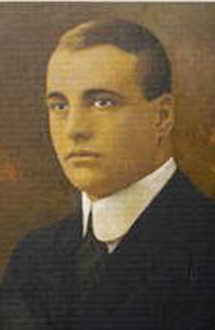 Carrick hired A.L. Russell (whose office was on the north side of Cameron Street [2] and who served with the Port Arthur Historical Society), of Port Arthur's Park Board, to plan the streets.

The [Mariday Park] land was subdivided as plan M-34 originally consisting of 516 lots. To make the lots more attractive, Carrick put in graded streets, cement walks, electric lights, water and advertised that the Port Arthur electric street railway cars "would come right by your door." Street cars already ran up Arthur Street (Red River Road) as far as Hill Street. It would be 1913 before the South Belt extension along South Hill Street to John Street would be in operation.

Carrick arranged for the property to be treed with yellow birch, poplar and spruce, have cement walks, macadamized streets, and water and sewer connections were as of 1910 being installed by the city under the direction of the City Engineer.

Carrick created promotional advertisements and brochures to sell the homes.

One of these brochures read, in part:

"Mariday" was acquired and held, almost since the inception of Port Arthur, by a somewhat different character—Alderman Daniel Francis Burk—who in the early days pinned his faith, future and funds to the then undeveloped resources on the shores of Thunder Bay. Adhering tenaciously to the belief that the then embyro [sic] site must, at a not-too-distant date, become the location of a populous and prosperous city, he proceeded to apply the British motto "What we have we hold." to the situation, and forthwith placed a "Nothing doing" sign on the property.

Possessed with the three outstanding characteristics of the pioneer of this country—sagacity, sense and sand[?]—Daniel Francis Burk bent his energies in other directions, arranged to liquidate the demands of the Tax Collector—and waited.

Time flies—but nowhere as in the West. The clearance became a hamlet, the hamlet merged into a village, the village assumed the proportions of a town—the Hand of Destiny was at work. The patron of the Blazed Trail—the speculator from the more effete East, dropped around and commenced to sit up and make a few observations.

"Who owns that hundred acres up on the hill?" was what he queried.

The reply was always the same, "He won't sell."

And so it came to pass that the citizens of the classic city of Port Arthur builded their homes up to and around Mariday Park, the gem spot of the city's residential section. Likewise, it also came to pass than Daniel Francis Burk, consoled by the realization of his early dreams, finally acceeded to the oft-expressed wish of the citizens, that the property should no longer impede the city's natural pathway of expansion. On 30th September 1909, he transferred to the present owner and developer for a snug fortune a property that had cost him a comparatively palty sum 30 years before.

Mr. A.L. Russell, O.L.S., of the city's Park Board, was entrusted the task of laying out the property, and the work has been skilfully and artistically executed.

All streets and avenues are 66 feet wide. The driveways are 28 feet wide. A strip of 19 feet on each side being reserved for boulevards and walks.

The property is beautifully treed with yellow birch, poplar and spruce, Cement walks, macadamized streets, water and sewer connections are being installed by the city under the direction of the City Engineer...

Mariday Park is beyond doubt the most beautiful residential property in Port Arthur, and at present prices it is a very attractive investment.

— James Arthur Little, Manager, Molsons Bank, quoted in "What to know about Mariday Park", a promotional brochure published by J.J. Carrick in 1910.

From my long experience in laying out properties in this most beautiful residential city, I am in a position to state that Mariday Park is the most favorably located property available in Port Arthur for residential purposes.

To the Investor and Homeseeker:

During the past six years I have been actively engaged in the Real Estate Business in Port Arthur and Fort William, and have handled over three and a half millions of Real Estate transactions, and I believe Mariday Park is absolutely the best Real Estate proposition ever offered in Western Canada. It is very central, has macadam streets, granolithic sidewalks, water and sewer connections, and a Street Railway running through the property.

Inside City property adjacent to realities, rather than outside property enshrouded in probabilities, is the only property I handle.

I believe that purchasers will make from two hundred to five hundred per cent profit on Mariday Park lots by the time they are paid for, on our easy terms of payments. As a Real Estate investment, it is unique, and I confidently recommend it to prospective purchasers.

Our reputation as vendors and developers of high-class, profitable Real Estate is before you. Mariday will multiply your money.

— J.J. Carrick, in the concluding page for "What to know about Mariday Park", a promotional brochure published by J.J. Carrick in 1910.

The only house in Mariday Park before Carrick became involved was built in about 1900. It's the house at the corner of High and Red River Road, and it built by Mr. Meikle. It was then the largest brick house in Port Arthur. Colonel J.A. Little of Molsons Bank later owned it. Meikle also owned the first automobile and had the first phone line in Port Arthur. Meikle was a member of town council in 1897 and 1898.

There are five blocks along 1 kilometre, for 200 metres per block frontage. That's 656 feet of frontage per side of a block, and with two sides, that's 46,000 feet of frontage, at an average price of $16 per foot, meant gross revenue of $736,000 to J.J. Carrick. Inflation is about 27x from 1910 to 2020, so that's about $20m CAD today. Subtracting the land purchase price of $160,000 (22% of his revenues) and the costs of leveling the land and adding streets and other utilities, it's possible Carrick may have earned a net profit of approximately $10m CAD in 2020 dollars for the entire Mariday Park project, which likely took several years to complete.

Of these 14, half of them do not extend outwards and exit only inside the Mariday Park neighbourhood. [marked with a *]

Dr. Penny Petrone (1925 - 2005) grew up in a poorer part of town, in the streets East and below Mariday Park. In her memoir she reflected on the elitist character of the neighbourhood, during her adolescence circa 1935 to 1945:

An article in the 10 January 1914 issue of the Daily News-Chronicle recorded the comparison that one Italian made between the coal docks and Mariday Park, the best residential area in Port Arthur: "Thousands and thousands of dollars have been spent in Mariday Park, which has about one-third the people the coal dock has. T'at is verra good. It maka nica street, nica place to live, but we who live in de coal dock have not got near dat much and we are tree times as big as the peoples in Mariday Park..."

With Mamma's permission we also sold lettuce, radishes and onions from her garden at five cents a bunch. Mary and Rita had regular customers in the neighbourhood, while I had to venture up the Bay Street steps into the Mariday Park area where the rich people lived. High, Summit and Winnipeg Avenues were a strange world of large houses and streets empty of pedestrians. The stillness frightened me. I was self-conscious when I rapped on the doors. Business was never good, and Mamma wondered whether the English ever ate garden fresh salads. After two or three forays, I stopped.

It did not take me long to discover just what a closed, predominantly WASP enclave, Port Arthur Collegiate was. I lived in the South End-the wrong end of the city. South-enders did not go to the Collegiate but to the Port Arthur Technical and Commercial High School...I had no choice if I wanted an academic diploma, as I very much did. The Collegiate was the only place to get one.

I knew my years were going to be unpleasant, but I had not fully anticipated what an ordeal they would turn out to be. To begin with, there was a terrible cliquishness in the school. The students lived in the "right" sections of town: Mariday Park, St. Patrick's Square, Prospect, Peter and College Streets. They spent summers together at their cottages on Loon Lake and along the beaches of Lake Superior. They got elected to every school office. Their parents belonged to the same fashionable clubs and went to the same Protestant churches. The mothers belonged to the same church groups. The fathers were members of the City Council, the Board of Education and the Rotary Club. My father was a labour gang foreman. And my mother spoke broken English. They did not belong to the right social clubs.

Mariday Park's 35 city blocks are almost entirely regular; the only exceptions are five blocks at the south-east corner, because of the vertical gradient between the streets.

Sometime between about 1938 and 1945, a retaining wall was built at the intersection of Cornwall Avenue and High Street, by Francesco Furfaro and Peter Steine, both of whom lived in Mariday Park.

Story has it, sometime before or during the second world war, this unique wall was constructed by an Italian immigrant by the name of Francesco Furfaro, who is listed in census records as being a cement finisher and mason. He and fellow labourer, Peter Steine, constructed the wall by hand, using authentic masonry techniques – taught to Francesco while he was an apprentice in Italy. Both men were residents of Mariday Park.

This wall was the subject of controversy as a proposal came before City Council in early 2017 to demolish it. [6]

I bought Mariday Park thirty years ago for twenty five hundred dollars, and I believe it will be worth one million dollars in two years.

— Alderman D.F. Burke, quoted in "What to know about Mariday Park", a promotional brochure published by J.J. Carrick in 1910.

Retrieved from "https://curriepedia.mywikis.wiki/w/index.php?title=Mariday_Park&oldid=7947"
Cookies help us deliver our services. By using our services, you agree to our use of cookies.