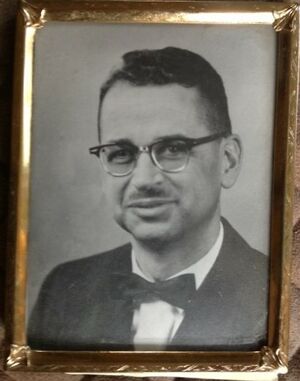 Two people are named for him:

He was born in Elmira, New York, USA, to Clint Newman and Eugenia Swift and later moved to Toronto, Ontario, Canada. He had two younger brothers:

He actually had two university degrees. He began at age 16, according to what his daughter Mary Ann remembers being told, which means he began attending Assumption College in Windsor (now University of Windsor) in Fall 1934 or early 1935. He obtained a general arts degree.

He then went on to obtain a degree in chemical engineering from the Faculty of Engineering at the University of Toronto.

Uncle Jack told me he was quite brilliant. He used to pace when he talked - sound familiar? I think he and you would have been kindred spirits.

Ruth and Bruce had three children:

Bruce had 10 grandchildren, although he never got to meet them. They were born to his daughters between 1977 and 1987:

Bruce was not able to serve in the war due to his eyesight, according to Sandra Kenzie.

From 1944 to 1949, and again from 1954 until his death in 1968, Bruce worked for Sangamo Company Limited, a manufacturer of electric clocks and meters. Bruce worked on meters, according to his daughter Mary Ann in 2019.

From 1949 to 1954 he worked for Hydro-Electric Power Commission of Ontario (HEPCO) (since 1974 now known as Ontario Hydro). He was headhunted for this role, according to Mary Ann in 2019, and at HEPCO he also worked on electric meters.

Sangamo Co., Ltd. was created in 1911 as the Canadian sales arm of Sangamo Electric Co. In early 1917, manufacturing began on Adelaide Street in Toronto in order to avoid the duty applied to imported meters. On the 1st of January 1932, Sangamo Co., Ltd. acquired exclusive rights to Wagner Electric Corp.'s motor business in Canada, including the right to operate the business under the Wagner company name. Manufacture of Wagner electric motors began in a plant on Stafford Street in Toronto.

This company, originally located at Laird Drive and Eglinton Avenue where a Canadian Tire is currently found, began producing electric meters in 1904. Displayed above their buildings, clearly marking their presence to the public, was a large rotating oval sign. Their electric meters, designed to measure watt hours of hydro consumption, were exported to 16 countries, including Mexico, Portugal, Africa, Central America, and Japan. Sangamo products were designed by Canadians, manufactured in Canada, made from Canadian materials and used by Canadians every day of the year in every province. The company had plants in Leaside and Three Rivers, Quebec, with sales offices in Toronto, Montreal, Winnipeg and Edmonton. The Leaside plant covered 180,000 square feet and had employed 825 people. In 1970, Prestolite acquired the Sangamo Motor Division which was located in Sarnia, Ontario. ... Some time later, Sangamo moved to Guelph, Ontario.

Retrieved from "https://curriepedia.mywikis.wiki/w/index.php?title=Bruce_Newman&oldid=550"
Cookies help us deliver our services. By using our services, you agree to our use of cookies.