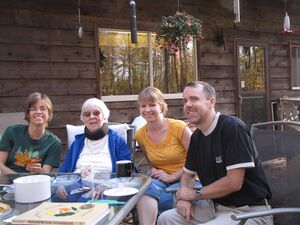 Megan, on left, with her grandmother Ruth, sister Laura, and husband Jon, 22 October 2011

Megan was born 21 March 1977, the first child born to Sandra and Jim Kenzie. Her middle name, Ruth, is for her maternal grandmother, Ruth Newman.

According to her mother, her two favourite things at age two were “reading books and playing in the dirt”! (Interestingly, in her future career as a teacher, she has worked both in library and outdoor education!)

On 21 July 2000 she married Jonathan Arthur “Jon” Vernon. They make their home in Scarborough, a suburb of Toronto.

She enjoys reading and gardening (as predicted by her mother many years ago!) She loves the outdoors, especially hiking, canoeing, camping, and participates in wilderness education courses through the P.I.N.E. Project in Toronto.

Retrieved from "https://curriepedia.mywikis.wiki/w/index.php?title=Megan_Kenzie&oldid=4018"
Cookies help us deliver our services. By using our services, you agree to our use of cookies.