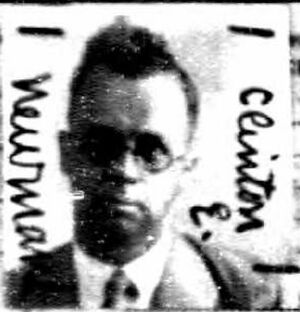 Sometime before World War I, his parents moved to Winnipeg, where they lived at 430 Victor Street.

He moved to America from September 1914 to 29 July 1917, working as a munitions worker, eventually "munitions inspector", during World War I.

On 12 August 1917, his border crossing document from Canada to the United States, notes "abandoned domicile". He was crossing into the US to take up residence with his father-in-law at 54 Ketcham Place, in Buffalo.

Later, he changed his career to be a travelling salesman, whose job led him to travel to many places in America.

In 1942, his employer's name is listed as "Inspection Board of United Kingdom and Canada", headquartered at 15 Broad Street, New York. He's living with his wife at 3801 Carter, Detroit, Wayne, Michigan.

He divorced his first wife in Reno, Nevada.

On 13 July 1942 he became a naturalized American citizen.

In 1948 he moved permanently to Pittsburgh.

On 15 July 1949, at age 57, he remarried to 44-year-old Virginia E. Worstell in Pinellas, Florida. At the time his occupation was listed on his marriage license as a "Sales Rep."

He and his wife built a home (according to Sandra Kenzie) and lived at 8280 Tanglewood Road, in McCandless, Pittsburgh, Pennsylvania.

In his final years he had Alzeimer's disease, which led him to wander around his leafy neighbourhood in Pittsburgh without knowing where he was, according to Mary Ann Currie.

He was born in Leamington, Ontario, Canada, and had been a Pittsburgh area resident for 24 years. He retired in 1962.

Mr. Newman was a member of the Watson Presbyterian Church; the American Society of Tool Engineers; Ivy Lodge No. 397, F&AM Allegheny Council 38; Tancred Commandery 48 of Pittsburgh, and the Thomas Peters chapter 250, Syria Shrine, of Windsor, Ont.

Friends will be received at the H.P. Brandt Funeral Home, 1032 Perry Highway, Ross Township, where services will be held at 3 p.m. tomorrow. Burial will be at Mt. Royal Cemetery.

Estate of EARL CLINTON NEWMAN a/k/a E. CLINTON NEWMAN, a/k/a E. C. NEWMAN, deceased of McCandless Township, No. 579 of 1982. Letters of Administration, C.T.A. on his estate were granted to the undersigned who requests all persons having claims or demands make known the same and all persons indebted to decedent to make payment without delay to Virginia Worstell Newman, Admtrx. 8280 Tanglewood Road, Pittsburgh, Pa. 15237, or to James W. Dunn, Jr., Atty., 6000 Babcock Boulevard, Pittsburgh, Pa. 15237.

Mary Ann Currie's biggest memory of her grandfather is when they would visit her home in Don Mills, Ontario, between perhaps the ages of 5 and 10 (1955 to 1960), he would always have candy or coins in his pockets for the girls. One time it was a quarter, which was a lot of money. He would later enjoy telling the story that he asked a young Mary Ann "So what's better than a quarter in your pocket?" and she precociously replied "two quarters in my pocket!"

Clint and his second wife, "Grandma Ginny", would visit Toronto every couple of years in the 1950s and 1960s, visiting his son Bruce Newman and his wife and 3 daughters. They would invariably go to the one Chinese restaurant in the area at the time, which was very large, and for the young girls marked Clint out as exotic and worldly.

According to Sandra, Clint was a businesslike man who was nonetheless warm and personable.

Retrieved from "https://curriepedia.mywikis.wiki/w/index.php?title=Clint_Newman&oldid=3115"
Cookies help us deliver our services. By using our services, you agree to our use of cookies.