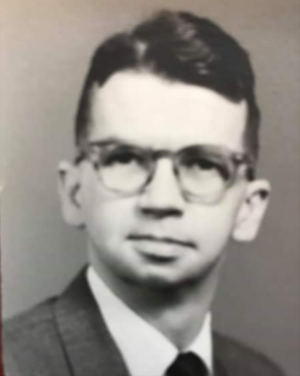 On 7 October 1939 he travelled with both his parents to Detroit, Michigan, to reside permanently.

He served as a Private First Class (PFC) [1] in the U.S. Army, an accomplishment noted on his tombstone.

He lived with his mother in the 1950s, at 13574 Cloverlawn in Detroit. Sandra Kenzie remembers visiting a few times, and staying in the attic. She recalls: "The screened-in front porch was Gene's little office and there were bookshelves full of mystery novels. That was where I first read Sherlock Holmes!"

He had 2 older brothers:

Karen went on to become a nurse, and marry Tony Furlich. Karen and Tony have 4 children:

Karen's family as of 2020 makes their home in Cadillac, Michigan. 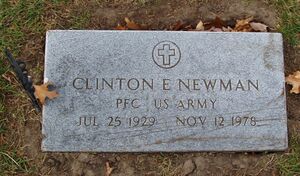 He lived at Spring Lake, Michigan just before his death.

He died 12 November 1978, in Grand Haven, Michigan. This is just a bit south of where his mother was living when she died, so presumably she was living in Muskegon to be near to her youngest son.

Like his eldest brother Bruce, he died an early death, aged just 49 years old. (Bruce died at 50. His other brother Jack died at 93.) 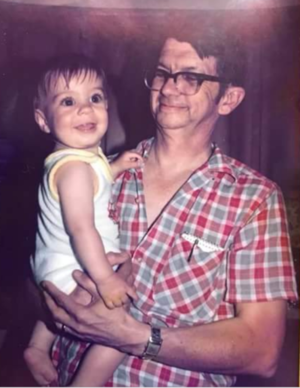 He was a very funny man, causing Sandra and her sisters to laugh so much while eating that they would get hiccups!

He owned a Cessna airplane, or flew them, close to Detroit. At one point he took Sandra up in one, but was disappointed that she spent the whole trip in terror. His little dips and tricks in the plane did not impress her!

Retrieved from "https://curriepedia.mywikis.wiki/w/index.php?title=Gene_Newman&oldid=3263"
Cookies help us deliver our services. By using our services, you agree to our use of cookies.