Approximately 50 camps divide up the waterfront property on the southern portion of the lake, and about 20 are on the northern portion. The two portions are joined by a small culvert that is traversible only by very small boats like kayaks. 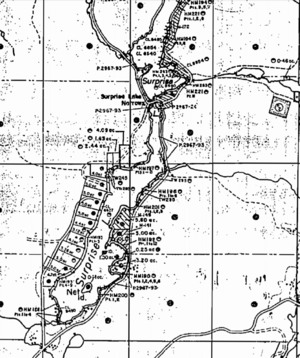 Surprise Lake, within the community of Lappe, shown as embedded within Gorham Geographic Township, 1955

Surprise Lake is considered within the loosely-defined community of Lappe, which as well as being a convenient name to refer to the collection of a few hundred homes in the area around the Lappe Store, is under Ontario law considered a unincorporated designated place.

A designated place (DPL) is a type of community or populated area identified by Statistics Canada for statistical purposes.

Lappe is actually the largest unincorporated designated place in Ontario, since by coincidence it happens to be the largest such community that has not crossed the threshold to becoming incorporated (i.e. with its own local government).

In Lappe, the only four buildings that are not simply private residences are:

The first two of these buildings are at the intersection of Kam Current Road and Dog Lake Road, and the others are one street away. 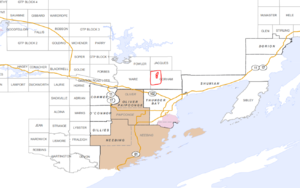 Lappe, in red, is within the Gorham Geographic Township

Lappe and Area Community Service Board 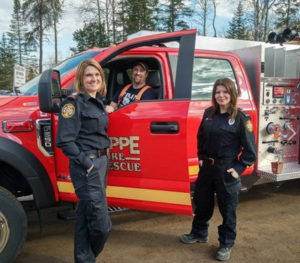 The Government of Ontario somehow designates and/or funds? "local services boards" to service unincorporated communities like Lappe which provides fire, recreation, and other services. Lappe's board, the Lappe and Area Community Service Board, is governed by five directors as of 2020, chaired by Donald J. "Don" Boyce. Don Boyce is the founder of Boyce Telecom, a distributor/dealer of NEC Telecommunications equipment. [2] [3] It appears the budget is approximately $120 per household; given the population of the area served by the "Lappe and Area" community service board is about 1,600 this translates to a budget of about $60,000 CAD per year. According to its Facebook page, the board provides "Fire Services, Recreation, Library Services and use of a Transfer & Recycling Facility in Lappe and Area in Gorham, Ontario, Canada." and was founded in October 1982.

Surprise Lake has been the site of two generations of Currie "camp" sites.

"Camp" is a Thunder Bay slang term for cottage, or small summer home usually by a lake.

Jack Currie and Lucy Currie moved to Surprise Lake in the early 1970s, moving from Waverley Park Towers, 405 Waverley Street. They made this first camp their year-round home. Jack's obituary noted that "during the 1980s they lived at Surprise Lake and were a central part of the social life there."

In the early 1990s, when Jack's increasing age made it difficult to maintain the property, they moved to Academy Towers in Thunder Bay, and sold the camp to their youngest son Ron Currie. Ron and his family maintained it as a summer home until selling it in 2006 (see below).

In 2006, Ron Currie and his wife Mary Ann Currie sold the first camp and purchased a larger camp, 200 metres south of the first camp. It has been the site of further family reunions, including in 2006 and 2010. It was the site of Carolyn Trottier's wedding reception in July 2016. 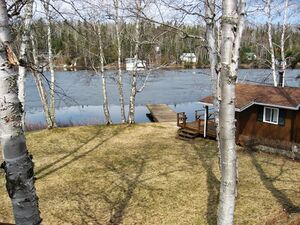 Retrieved from "https://curriepedia.mywikis.wiki/w/index.php?title=Surprise_Lake&oldid=7942"
Cookies help us deliver our services. By using our services, you agree to our use of cookies.