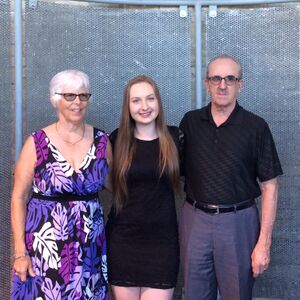 Marilyn Hermiston, with her granddaughter Sara Telles-Langdon and her husband Doug, 9 August 2016

Marilyn Joan Hermiston (nee Currie), born (1946-05-06) 6 May 1946 (age 76), is a retired Canadian laboratory technician and later, science lab assistant, mother, wife, and grandmother, who currently lives in Winnipeg, Manitoba, where she has spent most of her life.

She has four biological descendants, and at least 16 step-descendants from her second husband Doug.

She is the only daughter of Clyde Currie and Jean Boag.

Beginning 1966 she was a Registered Medical Technologist working in Winnipeg, Toronto, and Calgary.

In Fall 1975 she began her second, related, career, as a Science Lab Assistant at Winnipeg School Division.

From 1979 to 1987, in addition to her full-time job as a Science Lab Assistant, she also took courses part-time at the University of Manitoba, where she ultimately earned a Bachelor of Arts in Medical Technology.

In fall 1966-June 1967 attended Red River Community College (actually called Mb Institute of Technology at that time) to learn Medical Technology skills, then a year at St. Boniface Hospital in training. I worked there in Histology 1966-late 1970 til 6 weeks before Sharlene was born.

When in Toronto worked at Mississauga Hospital in Blood Bank Sept 1971, plus Hematology when on evening or night shift, then helped set up a lab for a detention center for juvenile delinquents, before joining Brian a month after he took a job change in Calgary. Stayed home until several months after Shaun was born. Then worked at Calgary Associate Clinic in Hematology and Chemistry, til Brian moved us back to Winnipeg, before leaving me to be a single parent a day after we bought a house. Worked summer replacement at St. Boniface Hosp. in Chemistry til got into Winnipeg School Division as a Science Lab Assistant. Women not leaving work after having babies anymore so no full time job in hospital. Fortunate to become a Science Lab Assistant, not so many hrs, but of course less pay.

After Doug and I moved in together, then in fall 1979 started my University of Manitoba 8 yr degree while working full time as Science Lab Assistant, raising 2 young children and occasionally some of Doug’s.

Graduated in 1987 with a Degree in Arts (Psych Major, Sociology Minor).

I retired Christmas 2002 from School Division #1 as a Science Lab Assistant after more than 25 years. 1975-1977 (in Ottawa for 10 months), some medtech part time in hospital til fall 1978, back to school div til I retired (with a summer replacement in hospital again for a few months about 1997 when I was only Pt time in school) . I first graduated medical technology from Red River Community College / St. Boniface Hospital in 1966. Worked til I had Sharlene in 1970, then again in Toronto, and at a clinic in Calgary, before getting into school division. I took University on a part time basis while working to get my B.A. (1979-1987) grad with major in Psych and minor in Sociology.

She first married Brian Anema (born 7 September 1945), who was born in Winnipeg but had Dutch ancestry, on 10 December 1966, and had two children with him:

Marilyn lived for 10 months in Ottawa, late March 1977- late Jan 1978 as part of a family with Don Myers and his two boys from a previous marriage, as a homemaker.

Marilyn met Doug Hermiston, lived together April 1979, bought a house in May 1980, and married 24 April 1981. He already had three children from a previous relationship. They were not adopted by Marilyn because their mother remained a significant part of their lives:

However, Doug did formally adopt Sharlene and Shaun, and so in fact they took his last name as well. 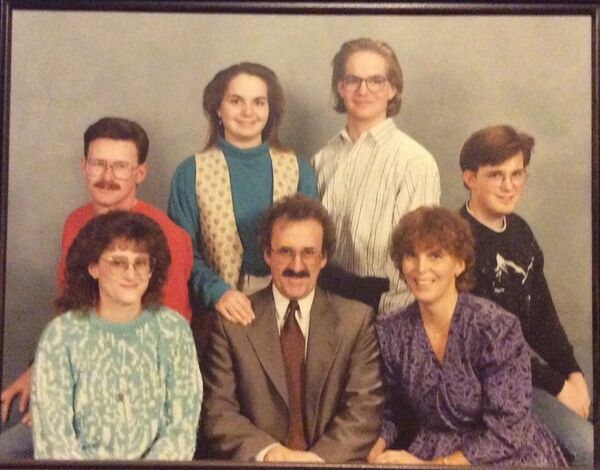 Retrieved from "https://curriepedia.mywikis.wiki/w/index.php?title=Marilyn_Hermiston&oldid=7844"
Cookies help us deliver our services. By using our services, you agree to our use of cookies.