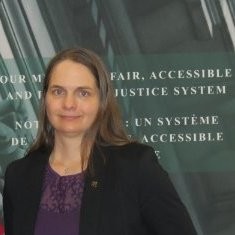 Sharlene was born 28 November 1970 as Sharlene Michelle Anema to Marilyn Hermiston and Brian Anema. In 1973, her parents had another child, Shaun.

Her parents divorced in 1977 with her mother taking full custody of Sharlene and her brother Shaun.

In 1981, Sharlene's mother remarried and she was adopted by Doug Hermiston, her mother's second husband, and she and her brother changed their names. Her name became Sharlene Michelle Hermiston.

In about 1997, Sharlene married David Telles-Langdon. He already had a daughter from a previous relationship:

Telles-Langdon had two biological children with her husband David:

My education includes a B.A. in Criminology in 1991 and an LLB (Bachelor of Law) in 1995, both from the University of Manitoba. My legal career began with an articling student position at Justice Canada in 1995. I was called to the bar in Manitoba in 1996 and have remained with Justice Canada ever since. I have a breadth of practice experience, including immigration, aboriginal, and constitutional law. I predominately have conduct of litigation at the appeal stage. I have represented the Attorney General of Canada in appeals, references, and interventions in the Federal Court of Appeal, the Manitoba, Saskatchewan, Ontario, and British Columbia Courts of Appeal, and in the Supreme Court of Canada.

As of 2021 she is Senior General Counsel with the Department of Justice Canada.

Retrieved from "https://curriepedia.mywikis.wiki/w/index.php?title=Sharlene_Telles-Langdon&oldid=7842"
Cookies help us deliver our services. By using our services, you agree to our use of cookies.