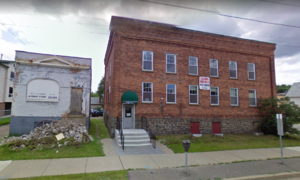 912 Donald Street East, as it appeared on Google Street View in August 2009

Amelia and Maurice Jackson, circa 1935

As far back as the 1930s, Amelia Jackson with her husband Maurice Jackson taught music and dance in Fort William.

Amelia Jackson, with husband Maurice Jackson, were apparently important figures in Fort William, and the subject of a book: "The Jacksons of Fort William" [2] "History of the four unique entertainment experiences created by the Jacksons and presented Canada wide and into the United States. The Kiltie Band, the Dancing School, the Military Band, and the Orchestra were produced by these two tireless workers in the "30's" for the benefit of all interested youngsters in the district". The book was written by Harvey Lambert Smyth (1919 - 2008), a local man who was in one of their groups. [3]

According to a biography of Gladys Sands (born 1923) from 2016 on Facebook, Maurice Jackson ran the Great Lakes Girls Orchestra ("Gladys moved to Fort William where she sang with Maurice Jackson's Great Lakes Girls' Orchestra, a twenty-piece band that toured across Canada and the Northern U.S. in a bus. She also worked in Maurice Jackson's Music Shop and sang live with the Sunrise Serenaders on CKPR radio. At fifteen she sang “Somewhere Over The Rainbow” in her audition for Joe Turner beating forty-nine others.") [4]

As of 1956 had a school called "Amelia Jackson Dance Studio".

The following year her husband died in Vancouver. It is not clear if they were still together.

Maurice Jackson apparently had no obituary in local Thunder Bay papers when he died in 1957 in Vancouver.

As of 1960, Amelia Jackson was already billed as a contemporary of Fay Gleeson, whose dance studio founded in 1958 still operates in Thunder Bay as of 2020 [12].

In 1964 Amelia established the "Northwest Ontario Ballet Guild" which persisted until at least 1975 or even 1978 when it was listed in the annual Revue program.

Although Amelia had been teaching dance since the 1930s, and teaching as the "Amelia Jackson School of Dance" since at least the 1950s, the studio known as the "Dance Centre of Northwestern Ontario" may have been founded by Amelia Jackson and her young student Don McKinnon in the 1960s.[14]). By 1978 the school had a faculty of 8: [8] 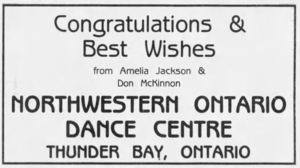 A congratulations posting from Amelia Jackson and Don McKinnon to Allan Cozzubbo, 27 September 1987, in the Calgary Herald

On 27 September 1987, Amelia and Don advertised best wishes to their dance teacher friend Alan Cozzubbo for 25 years of teaching dance. [4] Allan may have been married (!) to Lynn Abra [15] 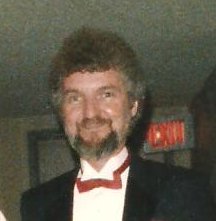 Born and raised in the city, Don was very active in the community throughout his life, and for the past 35 years, had taught dance in the district. All of those years were spend [sic] teaching with Amelia Jackson, and together they founded the Northwest Ontario Ballet Guild Dance Center [possible conflation of the Guild and Center into one name]. Don's whole life had been devoted to the art of dance and to [sic] anyone that was associated with him knew of his dedication. A teacher by profession he had been an employee of the Lakehead District Separate School Board for the past 27 years.

Don's leisure time was spent at the family camp at Sturgeon Bay. He was a longtime member of St. Agnes' Church and also St. Theresa's at Kakabeka.

He is survived by his mother Marguerite; brothers Bob, Bill and John "Jack" and his wife Jane all of Thunder Bay; sister-in-law Pat; numerous aunts, uncles, cousins, nieces, nephews and other relatives also survive. He was predeceased by his father Bob.

Funeral services will be held on Wednesday evening at 7:00 P.M. when friends and family will gather for Funeral Mass to be celebrated by Rev. Ken Pottie. Services will be complete [sic] in the Church with a private family interment to follow on Thursday in the family plot in St. Patrick's Cemetery. Removal will be made from the Blake Funeral Chapel prior to Mass time Wednesday. Prayers will be offered on Tuesday evening at 7:00 P.M. in the Blake Funeral Chapel.

In lieu of flowers, a memorial fund will be established to carry on Don's memory at the Northwest Dance Center [sic], and memorial cards may be obtained at the Blake Funeral Chapel.

"Mr. McKinnon, an RAD Ballet Teacher and protege Jazz Teacher of Matt Mattox ( Matt was in the movie"Seven Brides For Seven Brothers"..the axe Dance) Don examined the "Cozzubbo Jazz Exams" for three years and also did "Mock Ballet RAD Exams" for the Academy. Mr McKinnon passed in 1995 [actually it was 1989] due to a very bad car accident. He is remembered fondly by his family & Allan Jerry Cozzubbo, Al Gilbert, Kathy Wood" 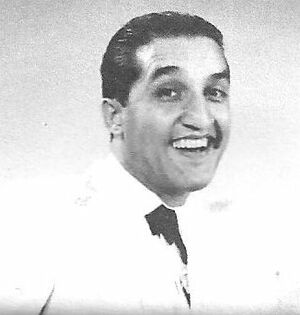 Don was apparently a disciple of tap dancer Al Gilbert of California. He administered the exams for the NWSD at the end of many semesters in at least the 1970s.

Thunder Bay's Legendary Ballerina, Amelia Jackson, owned and operated a very strict yet rewarding dance studio here in Thunder Bay, the Northwestern Dance Center. Along with Amelia, were dance Pros Don McKinnon, Lesley Almgren and Leslie Hunt who taught many dancers over the years. Year end exams were conducted by Al Gilbert of Hollywood. Here are some programs with the list of the Guild Members. Lots of names to tag or share with their families.

Likely after Don and Amelia's deaths in 1989 and 1990, respectively, the school was taken over by Leslie Almgren and/or her daughter Gina Almgren (born 20 January 1967) Gina Almgren or [19].

Leslie Almgren had been a faculty member since at least 1978 when she was listed as faculty alongside Don McKinnon in their annual Dance Revue event.

In 1996 they performed the Nutcracker.

On 13 April 1997 the school announced auditions for the Nutcracker once again [20].

The studio may have later moved to 426 Balmoral Street [22].

Gina Almgren later moved away from the Thunder Bay area, according to the owners of a dance clothing business as of 2019 in the basement of 912 Donald Street East - Flair Athletics [23]. The school may have shut down at this point.

[15] Ethel Duffield (1931 - 2011) Obituary. "As a member of Maurice Jackson's All Girl Band, she travelled from coast to coast and met every troop train, entertaining the troops during the war years." [39]

They also participated in workshops the previous day.

The following are the exam results:

Congratulations to all exam students!

Retrieved from "https://curriepedia.mywikis.wiki/w/index.php?title=Dance_Centre_of_Northwestern_Ontario&oldid=7914"
Cookies help us deliver our services. By using our services, you agree to our use of cookies.