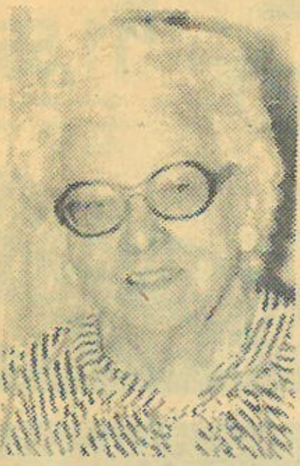 Amelia was born on 2 October 1904 to John and Mary Redden. John was a teacher at the Shuniah Mines; later the first manager of King grain elevator. [6]

Born in Port Arthur, Amelia was a lifetime resident of the city. She was a founding member of the Northwestern [Ontario] Ballet Guild, a member of the Canadian Dance Teachers Association, and St. Patrick's Cathedral and Catholic Women's League. Her whole life from early years until now, she was heavily involved in dancing, teaching, and promotion of dance.

Funeral services will be held on Monday morning when friends and family will gather for funeral mass at 10:30 a.m. in St. Patrick's Cathedral celebrated by Rev. P.M. Stilla. Interment will be in the family plot in St. Andrew's Cemetery. Removal will be made from the Blake Funeral Chapel prior to mass time. Prayers will be offered on Sunday afternoon at 2:00 p.m. in the Blake Funeral Chapel. Memorials to the North Western Ontario Ballet Guild [yet another misspelling of the name] would be appreciated.

Two years before her death she participated in a short article published in the local newspaper which gave a potted biography and her perspective on some topics.

HOW LONG IN THUNDER BAY AREA?: Outside of a few years, all her life.

FAMILY: She is the daughter of John and Mary Redden. He was a teacher at the Shuniah Mines; later first manager of King grain elevator. She married Maurice Jackson in 1929. He died in 1957. She has one son Maurice.

COMMUNITY ORGANIZATIONS: Foundeer of the Northwestern Ontario Ballet Guild, a member of St. Patrick's Cathedral and honorary member of the Canadian Dance Teachers' Asociation. Instructor of the Imperial Dance Society system for 25 years.

PROUDEST MOMENT: "One of the proudest moments we had was when we met the first hospital train returning from overseas with invalids during the Second World War. Another was my first graduate who graduated from the Imperial Dance Society. They said it couldn't be done in a small town like this."

BIGGEST CHANGE IN SOCIETY: "The growth of knowledge of today's children. That surprises me more than anything."

INTERESTS AND FAVORITE [sic] PASTIMES: Reading about the achievements of past students.

WHAT WOULD YOU LIKE CHANGED IN SOCIETY: "More honesty."

VIEWS ON TODAY'S YOUTH: "Well, I think they go off on a money-track mind. I think they are spoiled to the degree that they think the world is made of money and if they want anything, the government should put their hands in their pockets and give it to them."

MOST EXCITING EVENT IN HISTORY: "The first time we had an audition with the National Ballet of Canada and one of my students got accepted."

WHAT DO YOU SEE FOR THE FUTURE OF MANKIND: "I feel the ones who are going to survive are the ones who accept responsability. The ones who are living wild lives will not survive. They have to recognize the fact there is something above their greediness, pettiness, money and lying to get what they want. It's the people who are even-headed and who accept the laws of God who will survive."

Retrieved from "https://curriepedia.mywikis.wiki/w/index.php?title=Amelia_Jackson&oldid=7912"
Cookies help us deliver our services. By using our services, you agree to our use of cookies.