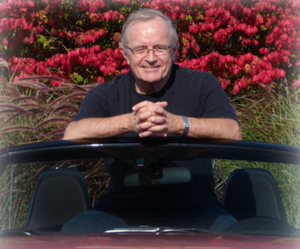 Marg had Chris and Scott and Beth (Beth is the only still alive). Beth has Marion and Alexander, they live on Vancouver Island. Chris died in a tragic hot tub accident. Scott had type 1 infant diabetes, amazed he made it as far as he did, died at age 40.

He grew up on Deloraine Avenue, in North Toronto, and attended Bathurst Heights Collegiate High School.

He studied at the University of Toronto, graduating in 1966 with a degree in Industrial Engineering.

In about 1975, he moved with his wife to a rural property near Milton, Ontario.

Jim began his career in automotive journalism at the humble Milton Tribune, the small local weekly paper in his community.

He began writing for the Toronto Star in 1985, where his work now appears in the Wheels section of the Saturday newspaper, and online at https://thestar.ca/wheels.

Jim appears on "Kenzie's Korner" on TSN's Motoring, Canada's most-watched and most-authoritative automotive television program, as of 2018 in its 30th season, which places it among the longest-running television programs in the world, not simply Canada.

Jim's work also appears in a variety of magazines, newspapers and web sites around the world.

Jim was the inaugural winner of the Journalist of the Year Award, presented by the Automobile Journalists Association of Canada. As of 2018 he serves on juries to select:

He has been an active, licensed, professional-grade racing driver since his early-twenties, and is a three-time Targa Newfoundland Rally Open Division driving champion. He was a longtime supporter of the Targa Newfoundland until it folded after the 2018 event.

Jim has a life-long interest in traffic safety, which actually pre-dates his automotive journalism career. This is why he originally selected SMARTRISK and now its successor Parachute, Canada's leading injury prevention charitable organization, as the beneficiary of his annual automotive photography calendar which he has produced since 1999.

Jim lives in Halton Hills, Ontario, "where he keeps his lovely 1977 American Motors Hornet hatchback in his Barn."

Laura has no long-term relation. No issue.

Retrieved from "https://curriepedia.mywikis.wiki/w/index.php?title=Jim_Kenzie&oldid=1566"
Cookies help us deliver our services. By using our services, you agree to our use of cookies.