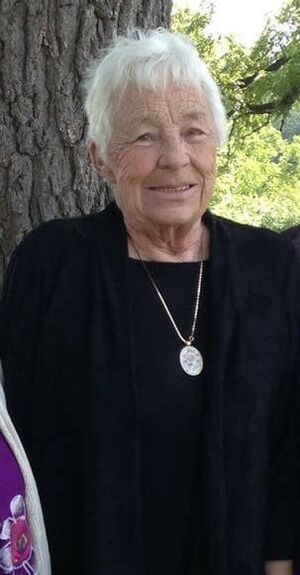 Dorothy Newman (nee Falshaw) (circa 1935 - 1 September 2018) was the widow of Gene Newman and the mother of Karen Furlich.

From 1953 to 1956 Dorothy was married to James "Jimmy" Stovel. Together they had one daughter:

Dorothy married Gene Newman around 1962, and together they had a daughter:

She was widowed when Gene died in 1978. She did not remarry.

My mom was married to a man named James Stovel from 1953-1956. My half sister, Linda Becks, is the result of that marriage. My mom and Jimmy divorced in 1956 and she met my dad, Clinton Eugene "Gene" Newman sometime around 1962.

From Linda, she had three other grandchildren: Sage Becks, Amanda Becks, and Nathan Becks. These children have issue; Dorothy apparently had three great-grandchildren as of her death on 1 September 2018.

Later in life, "Dorothy enjoyed bowling, gardening and an occasional trip to the casino", according to her obituary.

Near the time of her death she was apparently living at Quiet Creek Assisted Living, in Cadillac, Michigan.

She died 1 September 2018 in Cadillac, Michigan.

CADILLAC — Dorothy Newman of Cadillac, formerly of Spring Lake, passed away on September 1 at the age of 83 after a brief illness.

She was preceded in death by her husband, Clinton Newman, and parents, George and Margaret Falshaw.

Dorothy enjoyed bowling, gardening and an occasional trip to the casino and we know that she is now at peace. A special thank you to her friends Carol, Bernice and Drew, Hospice of Michigan, and the staff at Quiet Creek Assisted Living for their dedicated and loving care.

Per her request, no funeral services planned but there will be a gathering of family and friends at a future date.

Retrieved from "https://curriepedia.mywikis.wiki/w/index.php?title=Dorothy_Newman&oldid=5910"
Cookies help us deliver our services. By using our services, you agree to our use of cookies.