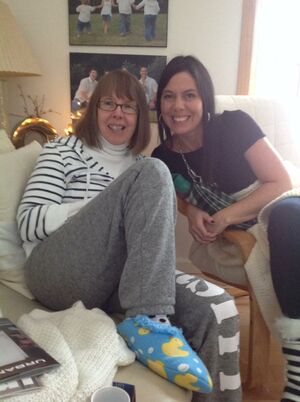 Loraine, with the mother of two of her grandchildren, Jasmine, at home at 1020 Williams Avenue, circa 2018

She lived at 812 Pruden Street in Fort William until about 1950.

She and her parents then moved out to a more rural location [now called Ridgecrest Road according to her cousin Marilyn in 2020] along the McIntyre River until "high school", so about 1961. Her uncle Harvey Smyth and his family, including her cousin Marilyn, followed. At the time, the harbour expressway had not been built, so access to her road terminated and there was no access to Fort William except by going doing around on Central Avenue. Now the area is fully integrated and a central part of Thunder Bay.

From 1961, presumably until her marriage in 1967, she lived at 16 Rupert Street in Port Arthur. Her parents kept this home until the early 1990s, when they moved to be closer to her in Fort Frances.

Loraine married Doug Currie on 26 July 1967 [1] and built a home with him in Fort Frances. They had two children:

She has lived in Fort Frances ever since.

A brief history of Myrt and Neil as per your request

Myrt, lovingly dubbed Mort, come to be in 1911, and Neil a year later. He called her the older woman.

Both grew up in Thunder Bay. Neil's parents not long there from Finland and Mort's via Winnipeg from England. Wigan to be exact. Bellingham cottage on the registry notice that stated her grandfather was a cowkeeper. We've decided that he was likely the one from Downton Abbey. Although that may not resemble fact, it does resemble fancy.

Purely from the one photo I saw of my dad's folks, and a few comments, life in Finland was austerish [sic], harsh on body and being. Dad has 2 sisters, one died as a child. Aunt Saimi I met but a few times. His parents both passed away before I was born.

Dad the navy man was stationed in Halifax and there learned the blacksmith trade, repairing ships until discharge. He became the last smithy at the provincial paper mill. At a previous workplace, he organized and led a strike over poor wages. Increase was achieved. Neil was fired. Employees refused to return unless he was hired back. He was. He stood for a number of social issues, was a communist for a while. As a kid, I remember we weren't to talk about that with anyone. Neither were we to mention the still in the basement. The msterious contraption that seemed to bubble and bew - My cousins and I later making the discovery that dandelion whisky or some other peculiarity was prepping for Sat. night. Dad was rather booky and broody. He'd read poetry to me as a small child. I tried to cipher Shakespeare, Browning, Robert Service. Something stuck though because I find the wolrd of words and meaning attractive. Cousin Gary said dad would recite as he showed him the stars through his telescope. Classical music the soundtrack of his world, the wonders of words, and stargazing, his go to space.

Mom had 3 brothers. A bit of a rascally bunch. She managed to escape punitive measures as she told me she was the apple of her dad's eye (the archaic version of being the fav, if you're not familiar)

Her father was a railway engineer, train no. 5353 and my beloved gram, a regal sort of soul, very women's institute and other such standard bearers of the era. It was a reasonably comfortable upbringing.

She became a bookkeeper. Ahead of her time in numerous ways, she stood up to harassing bosses with charity, calm and humour - a few colourful stories there! She was independent and collaborative. At ease with herself and others. She loved dancing, big band music. Her brother Harvey, whom Yubby all his life, was a crooner, with a Frank Sinatra kind of style. Harvey Smyth and his all girl band. Big clowns them. She was fun and smart with heart, that morphed itself into wisdom's wit.

Myrt and Neil were married in Montreal and were close to mid thirties before their only child [Loraine] was born. Older parents for the time, raising a quietish child. We lived on Pruden Street - 812 [in Fort William] - till I was about 8, and moved to the country. My aunt, Uncle, and 3 cousins bought the house next door and became my substitute siblings. Country bumpkins each and all. The McIntyre river was our hangout. Plus a tree fort we fashioned with imagination and a few sticks. And FYI - full reveal - I was the president of the Mario Lanza Fan Club at age 11, a self appointed position, but still. Roped my cuz Marilyn into being secretary. Stenographers' pad required. We put posters on trees but oddly, of the few neighbours, not a one came forward enthusiastically, or at all. But we pressed on, holding meetings with cousin Ron, then 7, and I, singing a robust version of one of my Mario favs - reprise of last summer when Ron came to visit. It was as stirring and gobsmackering [sic] as the original! And available upon request I might add, as we recorded the command preformance. Other than my dad teaching me to shoot a bow and arrow at the archery club he formed, it was a kind of cloistered wee world. Except for Sat. night, when our parents got all 'gussied' up for the Elks club. When they returned, entourage inclusive, in varying states of overserve (?) - suffice to say, many stories from there to here.

They moved to Rupert St when I was in high school. Until illness, they continued living engaged lives, active in allsorts [sic], including politics.

Mom and dad moved to Fort Frances when dad had a stroke at 80ish, and could no longer live at home. It was a good move, an opportunity to not only help them, but to know them in a new way. Dad lived for several years and although he was aphasic, he and I had many conversations, communicating on a different, depper level. His doctor said she'd never met anyone with such expressive eyes. He remained lucid till the end and met the challenge of illness with dignity and strength of character.

Mom lived till just shy of 96, retaining her remarkable perspective - ever the playful pragmatist, humour literally till the last, with acceptance and appreciation. A friend she made here said Myrt taught me how to laugh again. Noble work, that.

Apologies if I've overshared. I misplaced your questions so just jotted a general overview. As with any life or family, the book of being has many chapters, paragraphs, and passages.

Myrt and Neil did so enjoy your pop bys, thought of you as a dear and delightful wee laddie.

That you were. And I trust that remains intact, along with the all of the all the makes Michael, AKA Mickelmoose, his very own self.

A letter from Loraine to Michael Currie from February 2019.

Retrieved from "https://curriepedia.mywikis.wiki/w/index.php?title=Loraine_Currie&oldid=7929"
Cookies help us deliver our services. By using our services, you agree to our use of cookies.