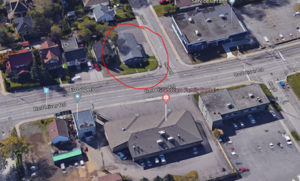 The building where Carmen's Barber Shop was located, at 565 Red River Road. Photo taken circa 2012.

Carmen's Barber Shop and Hairstyling (1982 - 2003) was a barber shop located in Mariday Park, at 565 Red River Road in Thunder Bay, Ontario, Canada. It was owned and operated by Italian-Canadian barber Carmen Groccia.

Carmen fittingly had a copy of The Wealthy Barber in his waiting area. [1]. Specialising in men's hair, at some point in the 1980s he also had a collection of vintage Playboy magazines for patrons to peruse before their haircuts.

Carmen's business was in the same building as Thumbusters. [1]

Carmen started barbering in Canada in 1957 at John Nicoli’s shop [in Port Arthur]. He then moved to Niagara Falls for 3 months. He came back and in 1958 barbered at Maurice’s Sport Store and Barbershop on Cumberland street. He then went to work for George Alexander’s barbershop on Cumberland Street from 1958-1970. In around 1971 till about 1982 he worked at Nifty Clip with Ed Blady on St. Paul Street. Then he opened his own shop in 1982 on Red River Road till his retirement in 2003. Then he had his barber chair at home and still continues to cut hair to this day for his old friends and family. He still cuts a gentleman’s hair to this day since 1958; his name is Peter Hogie.

In 1955, Carmen came to Canada and settled with his parents and siblings in Port Arthur, Ontario, (which became Thunder Bay in 1970). [3]

Retrieved from "https://curriepedia.mywikis.wiki/w/index.php?title=Carmen%27s_Barber_Shop&oldid=7790"
Cookies help us deliver our services. By using our services, you agree to our use of cookies.