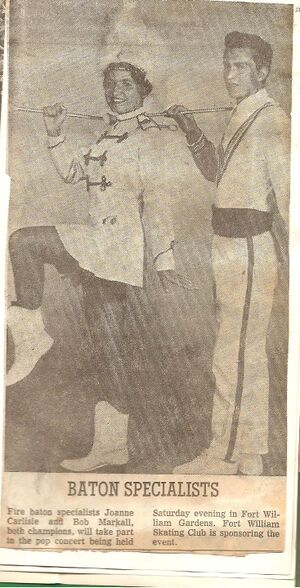 He was born circa 1944 to Fred Markall and Ethel Markall.

He lived on North Hill Street, with Betty Maxton as a neighbour.

After his mother died he co-owned his mother's dance studio with his sister Joyce's daughter Wendy Holmquist until she shut it down and started her own school, Dance Dynamics, in 2000.

He died of Amyotrophic Lateral Sclerosis (ALS) on 8 April 2005.

My thoughts are with all of you during this time... Mr. Markall was my gr. 5 & 6 teacher @ CD Howe, and every time I passed him in the hallway... without fail, he would be dancing, snapping his fingers with a huge grin on his face... he will be missed... Lindsay"

Sorry to hear of Bob's passing. I remember our Hill Street days with fond memories. Our thoughts are with you and the family.

Bob Markall passed away bravely with his family proudly by his side on Friday, April 8, 2005 after a long and courageous battle with ALS at the age of 61.

Bob was born in Port Arthur to the late Fred and Ethel Markall and was a lifetime resident of Thunder Bay. He married Leslie Hodgson on July 1, 1970.

He retired from the Lakehead Public School Board in 2000 after a 30 year teaching career where he touched the lives of many young people both in the classroom and with many extracurricular sports activities at Pine Street School and C.D. Howe School.

Bob's passion was his family dance school where he shared his creativity and his high expectations with many young people who learned more from Bob than dancing. Bob also spent many wonderful times with the K9 Strike Force Fly Ball Team and Agility Club with his faithful dog Calamity doing demonstrations and competitions. Until his illness, Bob enjoyed playing Old Timers Basketball, hockey and golfing. Bob's greatest joy was his family; never missing an opportunity to be involved in their activities or spending a quiet moment to solve a problem, making many wonderful memories throughout the years.

Bob will be forever missed by his best friend and wife Leslie, his daughter and soul mate Quinn, his pride and joy his son Dallas and wife Penny and granddaughter Taryn. He is survived by brother John (Lucy), sisters Barb (Chic) Hutcheon, Joyce (Dick) Paavi and Peggy (Hugh) Groombridge and many much loved nieces, nephews and great nieces and nephews.

Funeral services for the late Bob Markall will be held on Wednesday, April 13, 2005 at 11:00 a.m. in St. Michael's and All Angels Anglican Church with Rev. Peter Smyth officiating. Services will be complete in the church with interment of Ashes to take place at a later date. Visitation for family and friends will be held on Tuesday evening from 6:00 p.m. until 8:00 p.m. in the EVEREST FUNERAL CHAPEL, 299 Waverley St. at Algoma. Should friends so desire donations to the ALS Society of Ontario would be greatly appreciated. Please sign the online condolences at everestofthunderbay.com.

Retrieved from "https://curriepedia.mywikis.wiki/w/index.php?title=Bob_Markall&oldid=7916"
Cookies help us deliver our services. By using our services, you agree to our use of cookies.