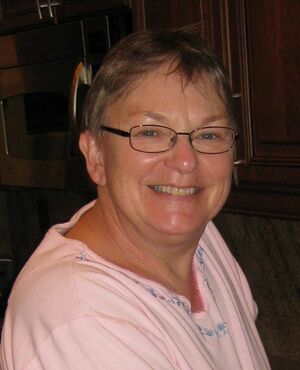 Betty Lynn Paske was born in Port Arthur, Ont., now part of Thunder Bay, the second eldest in a family of three daughters and one son. She often joked that although she was the second child, she suffered from middle-child syndrome because she had an older and younger sister. Her parents came from large families and there were always lots of visitors, and many raucous get-togethers, in their home.

School was not Betty Lynn's forte and she didn't hit her stride until she entered the nursing program at Port Arthur General Hospital in 1966. At the time, nursing students lived at the hospital and she loved having her own room for the first time. After graduating she began working in pediatrics, and later became night nursing supervisor for several years. She was known for her ability to stay calm and also take decisive action in an emergency. She continued nursing until her retirement in 2003.

She met Andy Maxton, who worked for Canadian National Railway as a switchman and an engineer, at a nursing students' party in 1967. They dated for two years, but it was not until they were in a serious car accident that she realized he was the one. They married in 1970 and settled in Thunder Bay, where they raised son Darren and daughter Shelby.

Perhaps it was the large family gatherings of her childhood that made Betty Lynn such a wonderful hostess and friend. She belonged to card and craft groups; was a member of curling teams for many years; baked for church sales (her lasagna was a popular item); volunteered for St. John Ambulance. She kept in contact with her nursing-school colleagues and loved attending reunions. She and Andy welcomed family and friends at their cottage on West Loon Lake, near Thunder Bay, and were enthusiastic participants in Loon Lake Campers Association events, from baseball games to three-legged races.

Their son Darren was born with Down syndrome in 1970, at a time when it was not uncommon for children with this disability to be institutionalized. Betty Lynn and Andy refused to do that. They worked hard to help Darren overcome obstacles and frustrations and develop to his potential. She advocated for his schooling and filled out endless forms to access whatever government programs and funds were available. Darren prospered and was involved in many activities before developing Alzheimer's in his early thirties. He lived at home until Betty Lynn's final illness, when his care became too much; he now lives in a long-term care facility.

Betty Lynn and Andy retired in their late 50s and moved to Cobourg, Ont., to be near daughter Shelby and her family. Leaving her home town was a major shift for Betty Lynn, but it didn't take long for her to establish new links. She made friends through the Red Hat and Probus social groups and by volunteering on the St. John Ambulance board of directors. The move was worth it because Gramma adored her three grandchildren and saw them often.

In December, 2012, Betty Lynn was diagnosed with inoperable, incurable cancer. She faced the diagnosis calmly and with the wish to spend her remaining time being happy. She was unable to travel, so many friends and family visited her in Cobourg. In November, 2013, when it became clear that palliative chemotherapy was no longer having any effect, she decided to stop treatment. She spent a wonderful Christmas with family, enjoying her grandchildren. She made arrangements for a celebration of her life, to be held in the spring or summer so it would be easier for friends and relatives to attend. Betty Lynn's wish was to be remembered with love and laughter and we will do our best to honour that.

Retrieved from "https://curriepedia.mywikis.wiki/w/index.php?title=Betty_Maxton&oldid=7743"
Cookies help us deliver our services. By using our services, you agree to our use of cookies.