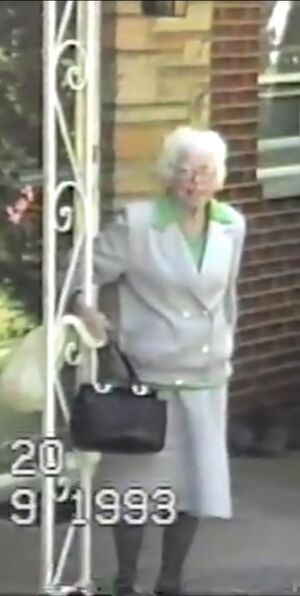 Virginia E. Newman (nee Worstell) (1905 - 18 May 1994) was the second wife of Clint Newman. She lived in Pittsburg and had a friendship and relation by marriage, but not a blood relation, with her step-daughter-in-law Ruth Newman.

On Friday 1 February 1924 she graduated "with honor" from Allegheny High School.

Virginia was a first-grade teacher at Conroy Education Center [1], which "provides education for children with special needs" for 40 years. (Likely from around 1930 to around 1970.) According to Mary Ann Currie, she retired around 65 (so 1970).

Marrying into the Newman family

At age 44, she married Clint Newman in Pinellas, Florida, on 15 July 1949. At the time her occupation was listed on her marriage license as a "teacher". This was her first marriage.

At the time of her husband's death they lived at 8280 Tanglewood Road, in McCandless, Pittsburgh, Pennsylvania.

She was perhaps the only close friend of Ruth Newman, travelling by train across Canada with her, and visiting Mary Ann Currie's "camp" family reunion at least once, and also travelling to Prince Edward Island with Ruth's three daughters and their families in 1991 or 1992.

Michael Currie knew her as "Grandma Ginny" and met her several times. Only once, on the way back from Disneyland, on 8 and 9 August 1993, did he actually visit her home in Pittsburgh, which he remembers as being quite "leafy" from the outside.

Mary Ann Currie remembers her as being "interested, curious" and interested in "travel" to the end of her days.

Her brother, Kenneth T. Worstell, died 27 September 1975. He also lived on Tanglewood Drive in McCandless, in Pittsburgh. His wife's name was Gladys, and he had two sons, David L. of Denver, Colorado and Kenneth E. of Champaign, Illinois. Kenneth T. was a retired graphics artist for United States Steel Corporation. He died of cancer in Montefiore Hospital. He worked for U.S. Steel for 27 years before retiring in 1972. He was a veteran of World War II and attended First Unitarian Church, Shadyside.

The widow of Kenneth, Gladys Worstell, on 3 September 1977 proposed to subdivide her property between Tanglewood Road and Vivian Drive. [2]

On 23 February 1987, Gladys' "request for a division of her three-lot property on Tanglewood Road was denied. The lots already create an irregular angle at the end of the road and another division would become a further distortion", according to McCandless Council. [3]

She died in 1994. She is buried with her husband in Mount Royal Cemetery, Glenshaw, Allegheny County, Pennsylvania, USA, Northland Section 22. She shares a headstone with her husband, so her name is given as "Virginia W.", with the "W." signifying her maiden rather than her middle name, which begins with "E", as seen on the name she signed on her marriage license.

Virginia is the eponym of Laura Kenzie's middle name.

Retrieved from "https://curriepedia.mywikis.wiki/w/index.php?title=Virginia_Worstell&oldid=3071"
Cookies help us deliver our services. By using our services, you agree to our use of cookies.