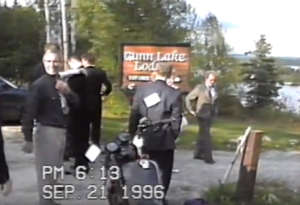 Marian and George's 50th Wedding Anniversary was a major family reunion at Gunn Lake Lodge in Kenora, Ontario, that began on 21 September 1996.

It was a celebration of the 50th anniversary of the wedding of Marian and George Gillis.

Featuring dozens of distant relatives, it was one of the very few times they all came together in one place.

Gunn Lake Lodge "near Minaki in Ontario's Lake of the Woods was owned by former Winnipeggers Sally Kendall and husband Kelly".

Raw video of the event

Retrieved from "https://curriepedia.mywikis.wiki/w/index.php?title=Marian_and_George%27s_50th_Wedding_Anniversary&oldid=1095"
Cookies help us deliver our services. By using our services, you agree to our use of cookies.