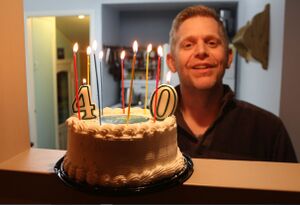 He was born 7 March 1976 to Allan Currie and Jackie Gregory.

After his parents divorced in 1980, he continued to live with his mother and her new husband, as they moved around Manitoba.

In 1994, he took a radio announcer course shortly after Grade 12. He then moved to Port Alberni [1], British Columbia to work as a DJ with the local radio station.

While working as a DJ, to supplement his income he worked as a chef at various restaurants. He had done some cooking at restaurants in Winnipeg. After a few years with the radio station he became bored and went into the restaurant industry full time.

In 2013 he returned to Winnipeg to be closer to family. He worked as the Head Chef at a number of restaurants.

His work as Head Chef made him very busy; he would work six days a week and most evenings. So, in 2016, he quit his job with no plans to go back to cooking.

Within two weeks he obtained a job with Naylor Association Solutions selling advertising in Trade Publications in Canada and the USA. As of 2018, he is "enjoying it thoroughly and is doing very well," according to his father.

Retrieved from "https://curriepedia.mywikis.wiki/w/index.php?title=Jason_Currie&oldid=2532"
Cookies help us deliver our services. By using our services, you agree to our use of cookies.