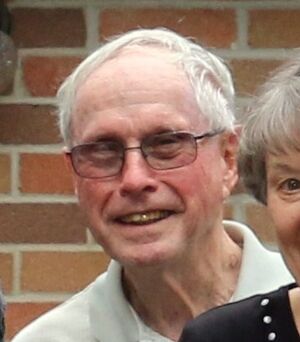 Ian Donald Coulter (born 27 September 1933) is a retired Canadian elementary school principal and younger brother of Ruth Newman. He has 3 children and four grandchildren, all living as of 2018.

Ian was born 27 September 1933, the seventh and youngest child of the Reverend Joseph Coulter and his wife Williamina Bessie Coulter.

As a child he was apparently called "Don", such as in a letter from his brother Everett to his sister Ruth from 25 August 1943.

Ian's children have yielded him four grandchildren, born between 1994 and 2005.

David partnered with Leanne Catherine Baker (born 23 May 1972) since 2003. They have two children:

Retrieved from "https://curriepedia.mywikis.wiki/w/index.php?title=Ian_Coulter&oldid=3969"
Cookies help us deliver our services. By using our services, you agree to our use of cookies.