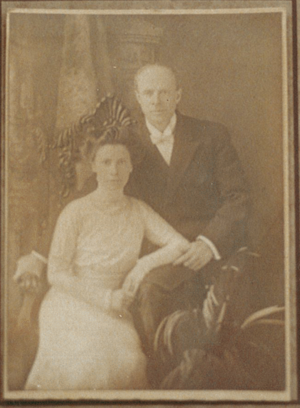 Williamine Bessie Coulter, at her wedding in Edmonton in 1911

Williamina married Joseph Coulter, a man many years older than her, in 1911 in Edmonton. Together they had seven children, including Ruth.

Williamina died of complications during a gall bladder surgery on 18 July 1948, aged 58.

According to Ruth Newman as told to her grandson Michael Currie in 2003, after this death, Williamina's mother Mary McCormick died soon afterwards aged about 90, "of a broken heart".

Retrieved from "https://curriepedia.mywikis.wiki/w/index.php?title=Williamina_Bessie_Coulter&oldid=3030"
Cookies help us deliver our services. By using our services, you agree to our use of cookies.