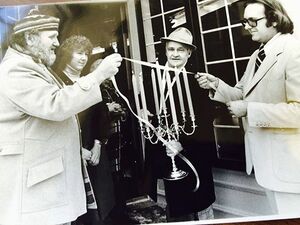 He was born in 1908 to Christena LeMaistre, one of the Almonte Sisters. His father, Edward Joshua LeMaistre, was a blacksmith.

He was the longtime mayor of Carleton Place. He was mayor in the late 1970s.

Mary Cook wrote an article for the Ottawa Citizen in March of 1977 and said for most the future was uncertain and grim. The announcement was met with grief and dismay in the town of Carleton Place. The phasing out of the plant was done over a 5-6 months period. Mayor Ted LeMaistre said it was a great shock to him, and he felt for the employees and families.

He fought the annexation of land from Carleton Place in 1979. [3]

He had five children:

Jamie LeMaistre, their son who died at 13

According to Canada's voter lists, this son Ted was living at 62 Charles Street as a teacher, with his wife Louise, expeditor, in 1972.

As of 2001 an "Edward Lemaistre" was living on 18 Princess Street, Carleton Place.

His father was a blacksmith [7].

Retrieved from "https://curriepedia.mywikis.wiki/w/index.php?title=Ted_LeMaistre&oldid=1670"
Cookies help us deliver our services. By using our services, you agree to our use of cookies.