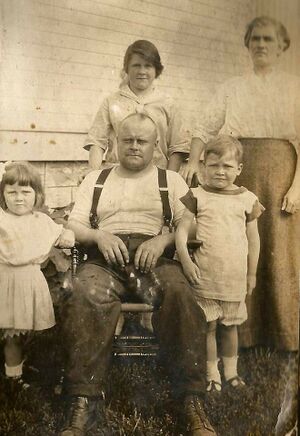 Edward with wife son John and two of his three daughters, likely Laura and Grace and not Dorothy given the ages

Edward Joshua LeMaistre (17 September 1876 - 1949) was a blacksmith born in Jersey, Channel Islands. He emigrated to Almonte, Canada, married Christena Currie, and had many children with her.

Edward Joshua LeMaistre was born on September 17, 1876, in St. Owen, Jersey, Channel Islands, to Henriette Caroline Maguennau (whose name he gives as "Margaret" on his marriage license) and John Le Manbré.

By 1886 he was learning his trade as a blacksmith.

In 1888 he emigrated to Canada and was apprenticed to the Robin Company in La Malbae, Quebec. [1] 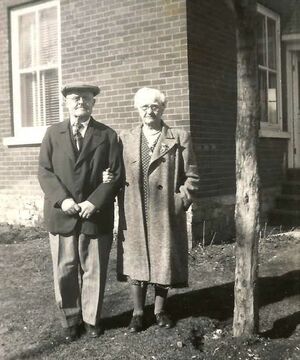 The story of how Edward made it to Canada is the subject of an article written by prolific Jersey prose author George Francis Le Feuvre (1891 - 1984) in La Société Jersiaise in 1961. It is not clear how Le Feuvre gathered his information; perhaps from direct interview with LeMaistre himself, although he had been dead for ten years by the time this article was published.

Another Jerseyman who made his debut with the Robin Company at Mal Bay was Edward Joshua Le Maistre, born at St Ouen in Jersey. He started learning his trade as a blacksmith in Jersey at the age of 11. At the age of 13 he was apprenticed to the Robin Company and found himself working as a helper in the company's forge at Mal Bay with a Jerseyman by the name of Esnouf as master blacksmith. The smithy was under the jurisdiction of "Moussieu" Collas.

Le Maistre was engaged for the usual term of five years for £50 sterling and had to provide his initial clothing for the journey across the ocean and the first period of apprenticeship until a sufficient fraction of the £50 accrued as earnings would enable him to replenish it.

The working hours were from sun-up to sun-down. They were long hours in summer. One morning, Edward Le Maistre overslept. Mr Esnouf came to the bunk-house where Edward slept in the second tier of wall-side bunks.

Esnouf was big and strong and finding Edward still asleep in his bunk lifted him bodily, and before the latter, only half awake, could resist, he dropped him from the height of the bunk to the floor, told him to hurry to the forge without breakfast, and himself made his way back there.

Edward Le Maistre was a short, stocky man. He was very hot tempered and full of fight. The more he thought of his plight as he dressed himself, the madder he became, and he made his way to the forge with murder in his heart, Arrived there, he picked up a sledge hammer and made for Esnouf. The latter started running around the forge with Le Maistre after him.

Edward happened to see Mr Collas coming towards the forge, however, and he knew he would be unable to justify his conduct so he dropped the hammer, ran out of the forge past Mr Collas and did not stop running until he arrived at Point St Peter.

A ship was about to cast off from the pier at the Point, bound for Quebec City, and Le Maistre, without a penny in his pocket and in possesssion of only the clothes on his back, jumped aboard.

On hearing his story, someone paid for his passage to Quebec. In that city he managed to get a few odd jobs which enabled him to earn enough money to pay his train fare to Ottawa, but became sick with typhoid fever on arrival in that city and was taken to hospital.

He remembered waking out of a violent fever one night in hospital, hungry as a bear. When he realised he did not have a single penny to buy food he started to cry. Perhaps this seems childish but he was only about 14 years old and this was his first experience in a hospital and did not know food was provided by the institution.

A nurse came along and explained that money had nothing to do with his lack of food, that fasting was part of the treatment for his illness and that nourishment would be given him as soon as his condition permitted it.

When he was discharged he had no money, and walking dejectedly along Rideau Street in Ottawa, wondering what he was going to do for shelter and food, he saw a placard in the window of the Railroad station advertising for woodsmen to go to a lumber camp in the bush in Northern Ontario for the winter.

He applied for a job, was accepted, and given a small amount of money in advance to buy clothing and food. This enabled him to eat a good meal before presenting himself for the long train journey ahead.

Our friend Le Maistre had never wielded an axe, and the first time he tried to fell a tree he inflicted a deep gash in the calf of his own leg. This incurred the wrath of his foreman who accused him of permitting himself to be hired under false pretences. The foreman happened to be a good fellow, however, and he placed Le Maistre in the cookhouse, there to help the camp's cook while his leg was healing.

As is often the case among a large gang of men, one of the bushmen was a bully and a braggart and he happened to have some knowledge of horse-shoeing and had hitherto shod the horses when necessary. One day, when two horses happened to need new shoes, he was slightly inebriated, and, bragging about his prowess, offered to give $5 to anyone who could shoe a horse as quickly and efficiently as he could.

Edward Le Maistre, standing by, took up the challenge. To everybody's surprise he easily won the $5. The foreman came forward and noted that only a professional horse-shoer could do such an excellent job, and on Edward's admission that he was a blacksmith, asked why the dickens he had not said so in the first place. A forge was immediately erected for him and he became the camp's official blacksmith and horse-shoer, at a much higher wage.

During that winter he became very friendly with a woodsman whose home was in Almonte, Ontario, and went with him to that city when the camp broke up in the spring. There, he met the lady who eventually became Mrs Le Maistre and, in the course of future years presented him with six children.

In Almonte, Edward Le Maistre set up a forge and became prosperous. When the automobile made its appearance, however, Edward made up his mind that it was bound to replace the horse, and with an eye to the future, he purchased a car and disassembled it to find out what made it work.

In time, he mastered its intricacies completely, and set up a garage, the first to be established in that city and suburban area, for the repairing of automobiles. Mr Le Maistre became one of the leading citizens of Almonte and was elected to the city council and served the community in various capacities for many years. He also accumulated considerable real estate, and when he died in 1953 every one of his six children inherited a home.

Not all who began their careers with Charles Robin Collas Company ended so successfully. Generally speaking, however, their lot, though hard on account of discipline and climate, was not an unhappy one, and it is significant that all beach¬masters and store managers were Jerseymen who had stayed with the company after serving their initial apprenticeships.

Retrieved from "https://curriepedia.mywikis.wiki/w/index.php?title=Edward_Joshua_LeMaistre&oldid=1641"
Cookies help us deliver our services. By using our services, you agree to our use of cookies.