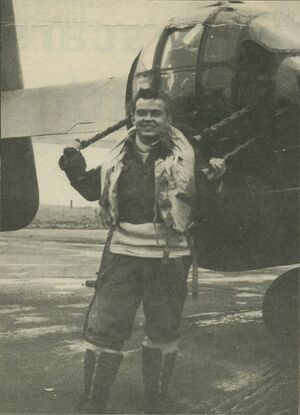 Les Johnston grew up in a small farming community called Utterson, near Huntsville, Ontario. His parents had a small farm.

Johnston enlisted in the Royal Canadian Air Force in 1942. Johnston didn't train out West, but was instead sent to the East coast somewhere around Halifax, Nova Scotia, according to his son Michael's memories as of 2018.

Life after the war

Johnston retired voluntarily from the RCAF at the end of the war and in 1946 assumed ownership of an insurance business from Stan Taylor, of Gravenhurst. (Stan Taylor went on to a lengthy career in education as a teacher and principal at Gravenhurst Public School.)

From 1946, Johnston was involved, one way or the other, with the insurance company his son now [as of 1995] operates on Muskoka Road south. [His son Michael operated it until sometime before 2018 when he retired].

Les married a woman called Jean (who survived to at least 1995), and with her had three children:

They raised their children in Gravenhurst, Ontario, in Muskoka.

As of 2019, Johnston's son Michael is retired from the insurance business he inherited from his father, and drives a taxi part-time to keep himself busy and make a little extra income. Michael continues to live in Gravenhurst.

Yes it was my father [Les Johnston] that served with Neill Currie and I can tell you he thought very highly of him and all the other crew. He told me they were like brothers to him and felt he was lucky having served with them and having them as his fellow crew.

My father didn't talk very much about his time overseas during the war, but as he got older, I was able to get [to] talk to him regarding this. Unfortunately he passed away [on 18 October 1983] before I could talk to him again, and the only picture I have of him is of him standing at his turret holding the machine guns he used, and the plane was a Lancaster bomber. It's funny because in the picture, my dad's hair is dark, but when he came home my mom told me it had turned mostly white. I still have the medals he received and requested and got from [the Department] of Defense all his war time records, from when he was in training out on east coast to when he went over seas and returned.

Dad [Les Johnston] grew up near Huntsville Ontario in a small little farming community called Utterson Ontario where my grandparents ( dad's parents ) had a small farm. He didn't train out West but was sent to the east coast somewhere around Halifax Nova Scotia if I remember correctly.

I have dad's military records but their with my nephew right now who also has taken a great interest in his Poppa's war experience and Bryan [the son of Michael's brother, Peter] writes for a living and the two of us hope to write a book regarding dad's war experience.

When dad did talk to me about the war he did talk about his crew mates, and did mention that he and the other crew had great trust in your great uncle Neill Currie as their pilot plus because of the chance they wouldn't come back grew to be like brothers and love each other like brothers. Dad said that they always felt with your great-uncle Neill Currie flying as pilot that they'd get home and they did some 33 times, which was quite amazing.

No, my dad never mentioned anything about the actual raids they went on or what [happened] during them, something I wish we could have talked about but I never pushed when I felt it was a subject he didn't want to discuss. I know he was close to his crew during the time he was overseas as they went [through] so much.

Les' son Michael was interviewed by Terry Currie (no relation to Neill Currie) on the occasion of the 50th anniversary of V-E day for the 5-16 May 1995 issue of Muskoka Today:

Its powerful engines made an unmistakable roar and you could tell it was a Lancaster bomber, even when enclosed by cloud cover, and by the vibration which literally shook the earth.

The dark and ominous silhouette of the legendary bomber was both loved and loathed; worshipped at home but feared for its crashing payload of explosives over enemy territory.

Its form is visibly cumbersome but its potential undeniably lethal.

The lancaster bomber has earned every bit of its heritage, the legacy of [the] horrendous battle against Nazism; the preservation of freedom and democracy.

And it was Les Johnston's task to utilize firepower from the Lancaster's glassed half-sphered turret situated at the tail end of the plane; a helluva target for the enemy fighter pilots looking to immobilize its four deadly Browning guns poking out from the clear dome.

It was kill or be killed.

Tough rules in war's game - or rather gamble - for survival.

But there was more at stake than one life. The lives of fellow [crewmen] and well-being of the rest of the 434 Squadron. It was understood.

Johnston was part of that effort aboard the mighty Lancaster bomber.

Johnston's son, Michael, of Gravenhurst, shows [Ted Currie, the writer], a cherished dog-eared photograph of his father in flight attire, in front of the plane's rear turret.

Posed, the rear gunner rests his hands on the Brownings, portraying with a clear grin the confidence the young Muskoka man possessed of the plane, artillery and his crew-mates.

The reality that this same plane could have become his coffin isn't obvious, yet it's impossible to ignore both the youth and innocence of the rookie gunner - with so much life yet to live.

Michael takes another look at the photo before sorting through the deep file of his father's R.C.A.F. service records.

Les died on Oct. 18, 1983, and Michael admits he has some regrets not knowing more about his father's role in battle.

"He just wouldn't talk about it. It wasn't until after he died that we started finding out more about his role on the LAncaster."

There's a small box with service medals and ribbons in front of Michael and he holds it out for examination.

"We found these tucked away. I don't know what they're all for - some are service, others, I'm still not sure about. But you know," he said after slipping the lid back on the tiny box, "if my father was alive today, even with this V-E anniversary, he wouldn't talk about it. He just didn't bring it up, although he was a regular supporter of the legion."

And Michael doubts whether Les would have shared war recollections with fellow legionnaires and friends.

Michael agrees his father had witnessed massive carnage, a reason many veterans left stories of the past in the past - their past.

"We respected him for not wanting to talk about it," the Gravenhurst insurance broker admits. "I've got so many questions."

According to the assortment of documents gathered by Michael from inquiries to the National Military Archives, Les was engaged from 1942-45 by the R.C.A.F. and spent a year at the end of the war (1944) flying sorties from England with the 434th Squadron.

Michael is unsure how many sorties his father had been involved in but believed them to be numerous. He survived!

"He had real confidence in the pilot [Neill Currie] and crew,", he said. A lot of Lancaster crewmates of the 434th did not come back. Possibly it was this reality of war's drastic consequence - the fact some of his friends perished in combat - that contributed to the airman's lasting silence.

It was when fellow crewman and writer [Jim] Vipond, former sport editor of the Globe and Mail, attended the funeral for Les in 1983, that Michael admits his own interest was generated. Les was part of Lancaster history.

Les retired voluntarily from the RCAF at the end of the war and in 1946 assumed ownership of an insurance business from Stan Taylor, of Gravenhurst, who went on to a lengthy career in education as a teacher and principal at Gravenhurst Public School.

From 1946 Les was involved, one way or the other, with the insurance company his son now [as of 1995] operates on Muskoka Road south. [Michael operated it until sometime before 2018 when he retired].

Les is also survived [as of 1995] by his wife, Jean, daughter Donna and another son, Peter.

Michael admits an interest in finding out more about his father, but he remains thankful the ravages of history had spared his father's life and the crewmen of the 434th Squadron Lancaster - England 1994.

Retrieved from "https://curriepedia.mywikis.wiki/w/index.php?title=Les_Johnston&oldid=7700"
Cookies help us deliver our services. By using our services, you agree to our use of cookies.