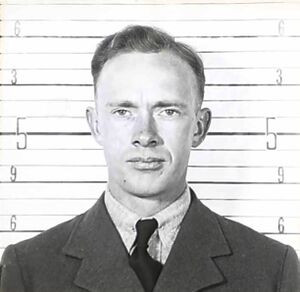 Flying Officer Hubert Vincent Coulter (19 May 1915 - 7 May 1943; 27 years) was a Canadian elementary school teacher who served as light bomber navigator with the Royal Air Force during World War 2. His plane was shot down by a German fighter off the coast of Algeria while on convoy patrol on 7 May 1943, in the final days of the North Africa campaign. [1]

He was born to Joseph and Williamina Bessie Coulter in Stettier, Alberta. He had six siblings, including Everett Coulter, who was also a navigator in the RCAF, and who also died in World War II.

With his family, he moved many times as a child since his father was a minister with the United Church.

He attended Scarborough Collegiate Institute (since 1989 called R.H. King Academy) for secondary school, and is memorialized on their walls with a picture as one of 66 alumni killed in World War II, as of 2019 [2]

He was a student at Victoria College at the University of Toronto from 1935-1936.

After graduating, he taught at an elementary school in Minnow Lake, near Sudbury.

While stationed in Blida, Algeria, on 4 April 1943 he wrote to his sister Ruth, asking her to help his girlfriend, Barbara Lucas, to buy an engagement ring.

By now you will probably have received my first letter from North Africa. This isn't really a letter, just a note as I have a very great favour to ask of you and I know you will grant it. Barb and I have decided to become engaged and I am sending her a cheque to buy a ring. However she did suggest that you could get it for her. However I told her she might as well save time and get it herself or get her sister to buy it. However, she may still want you to get it, and if she writes you I know you will help her out.

Things are going along fine here and I hope they are at home too. I will be writing home to tell them of my decision about becoming engaged. Barb has been pretty swell to me and has certainly shown herself to be true blue as far as I'm concerned and I know it will make her very happy to have a ring so I am sending the money for it. All for now. Best regards to Bruce

After training as a navigator and achieving the rank of Flying Officer, he navigated a bomber to England in June 1942.

He was posted with the 608th Squadron of the United Kingdom (UK)'s Air Force, the Royal Air Force, which worked closely with the RCAF.

Hubert's final flight, left from Blida Airport, Algeria, and was convoy duty near the the first point on the map. Tunis, Tunisia was liberated later that day. 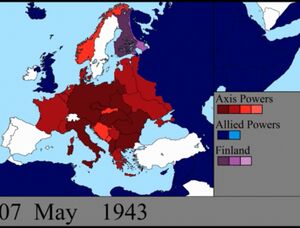 In March 1943, he was posted to his squadron's base—an airport in Algeria called Blida Airport. They had been operating there since the base was liberated by the 11th British Infantry Brigade on 8 November 1942. At this point they were flying Lockheed Hudson light bombers. The Africa Campaign was all but over; since December it was only a small pocket of German resistance at Tunis that remained, and although it consisted of hundreds of thousands of experienced troops, the Germans were surrounded by all sides.

On 7 May, Tunis and Bizerte were liberated by Allied troops, with Bizerte falling to the Americans at 4:15 pm local time, and the Tunisian capital being conquered five minutes later by the British First Army. These actions were being supported by the 608th Squadron. [3]

Earlier that day, at 12:40 local time, Coulter and his three crew members departed in a Hudson Mark VI with airplane number FK691, to do convoy patrol for a flotilla that left Algiers and was travelling eastward. At 15:55 their plane was shot down by a Junkers Ju 88, likely from Kampfgeschwader 76 (KG 76) squadron. The hospital ship Amarapoora had seen an aircraft crash into the sea at 15:55. The Amarapoora searched the sea but found no one. The crew would never be found.

By [early May 1943], the desert war in North Africa was coming to a dusty and blood spattered end. Very few Axis troops escaped from Tunisia across the azure sea to haven in Italy. On May 7th, the day the City of Tunis fell to the allied ground forces, RCAF crew, F/S Pilot E.C. Smith, J.H. Johnston, R.A. Newton and school teacher, now navigator, Hubert V. Coulter, took off in Hudson X FK 691 out of Blida at 12.40 pm on a convoy patrol. They were to escort a flotilla that departed the bustling port of Algiers and was heading east on the Med toward Egypt. Due back at Blida no later than [17.30] that afternoon, Smith and his crew did not return. At [18.10] pm, the Duty Signals Officer began calling Smith on the wireless. Two and a half hours later [at 20.40] he gave up attempting to contact the lost Hudson. Clues to their disappearance began to filter back to Blida. Radar at Maison Blanche reported two tracks [on radar screens] near the convoy. At [15.30] pm one of the tracks on Maison Blanche radar faded away. "One of these aircraft was later identified as a JU 88." The next piece of evidence on Hudson X came from the hospital ship, Amarapoora, that docked at Oran on the 8th of May. They saw an aircraft with British insignia crash into the sea at [15.55] pm. The Amarapoora searched the area but found no one. Indeed, Pilot Everett Charles Smith, Navigator Bert Coulter, Johnston and Newton would never be found. They were another crew whose names would be inscribed on the Malta War Memorial.

He was reported as "missing after air operations in North Africa" on 7 May 1943. 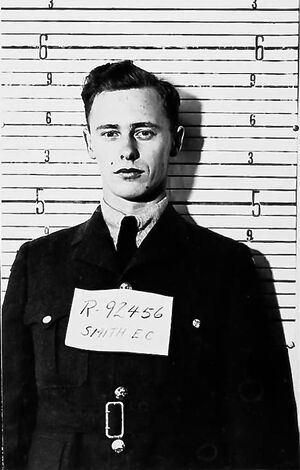 Hubert Coulter, who was born in Stettier, Alta., taught school at Minnow Lake, near Sudbury, before he enlisted on July 12, 1941. He took his military training at St. Hubert and Victoriaville, Que.; Chatham, N.B.; Belleville and Penfield, N.B., where he was commissioned as a pilot officer. in June, last year, he navigated a bomber across to England. In March he was sent to North Africa, soon after becoming a flying officer.

FO. Coulter was educated at the Normal School, Toronto, and Scarboro Collegiate. His elder brother, LAC. Wesley Coulter, is being trained as a navigated [sic] at St. Johns, Que. One of his younger brothers, Sgt. Everett Coulter, R.C.A.F., is overseas. Another brother Kenneth, is in Ottawa with the Inspection Board of the United Kingdom and Canada. One of his sisters is Mrs. B.F. Newman; the elder sister, 14-year-old Elanie, is at home with her parents and 9-year-old Ian Donald.

Pte. [sic] Hubert Vincent Coulter was born May 19, 1915 at Stettler, Alberta. He was the son of Rev. Joseph and Mrs. Bessie Coulter, third oldest in a family of five boys and two girls. They lived in Western Canada until moving to Little Current in 1928. After completing high school, Hubert attended Toronto Normal School. He was an elementary school teacher in Minnow Lake and Webwood, Ontario before enlisting in the R.C.A.F., later becoming a navigator in the airforce. Hubert was reported missing in action on May 7, 1943.

Along with others who have no known grave, he is commemmorated at the Malta Memorial, in Malta, Panel 10, Column 1.

His name also appears as at the University of Toronto, at the Memorial Arch – the names of those who died in the Second World War were added to the archway beneath the Soldiers’ Tower in 1949. The name of “F/O H. V. COULTER R.C.A.F.” is among the names inscribed.

The commander of the four boys who died, Clair Mansell Maybury Grece [5], Wing Commander, Commanding, 608 Squadron, R.A.F., sent letters to the boys' mothers. One letter which survives is to the pilot Everett Smith's mother. It contains details of the circumstances of their death. 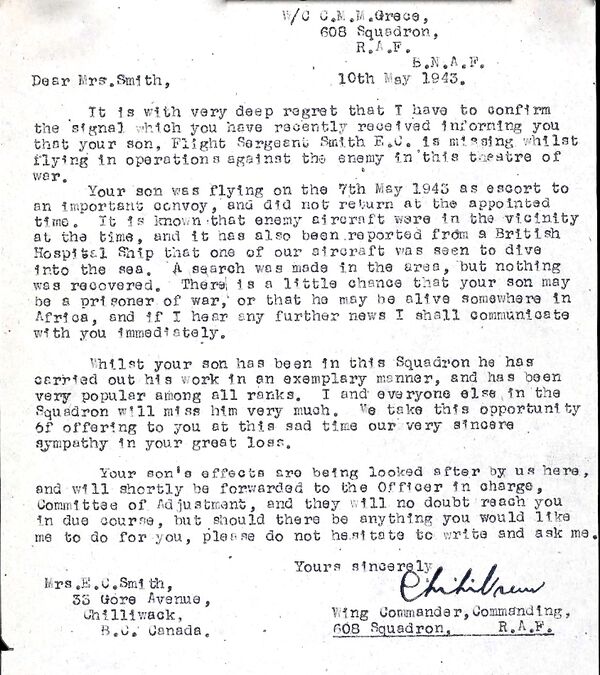 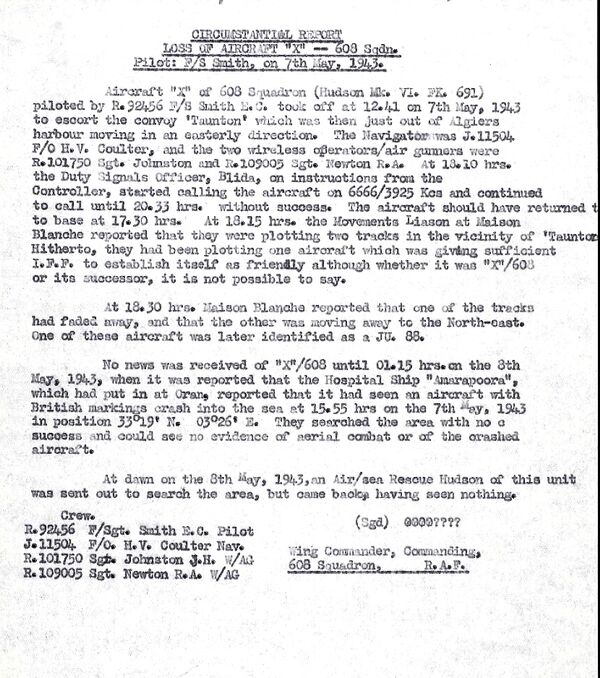 Internal R.A.F. document noting the cirumstances of the 7 May crash of Coulter's plane

Retrieved from "https://curriepedia.mywikis.wiki/w/index.php?title=Hubert_Coulter&oldid=2977"
Cookies help us deliver our services. By using our services, you agree to our use of cookies.