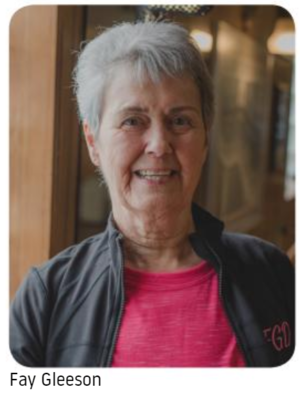 Fay Steadwell (nee Gleeson) (born circa 1943) is the owner of the Fay Gleeson Dance Centre in Thunder Bay, Ontario.

Fay was born circa 1943 to Lorne Gleeson and his wife Zip. She was one of six siblings, five of whom were known as the "Five Gleesons" acrobatic troupe in the 1950s. [1]

Her brother Gary married another dancer 7 years her senior, called Rhodella Achtenberg. Rhodella owned a dance studio in Fort William. When Gary and Rhodella moved to Toronto in 1959, Rhodella gave Fay, who was just 15 at the time, her dance studio. Fay has managed it ever since, up to at least 2020. In recent years she has been assisted in running the studio by her niece Cindy Kennedy (nee Gleeson).

Retrieved from "https://curriepedia.mywikis.wiki/w/index.php?title=Fay_Gleeson&oldid=6775"
Cookies help us deliver our services. By using our services, you agree to our use of cookies.