Betty Glover Hunt was born on April 2, 1923 in Winnipeg. Manitoba. She was the eldest child of Frank and Beatrice (Graham) Hunt.

According to Nancy Greenwald, Betty was good friends with Pam Miller's mother. 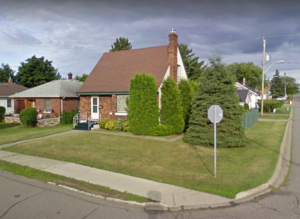 Betty and George had three daughters:

In about 1992, Michael and his friend Eric Miller went with a wheelbarrow full of rocks to sell to the neighbourhood. Michael remembers specifically visiting Mrs. Burke's house. She must have found this quite amusing as a gemologist.

One day in about 1995 Mrs. Burke was gardening and was actually talking sweetly to one of her flowers, making conversation with it. Michael surprised Betty walking up on his route to deliver the paper. Michael was a bit embarrassed to have surprised her in that compromising position, but thought it was very sweet.

In May 2001, she sent Michael a congratulations letter when he won an honourable mention in the BP/EUI Essay Contest 2001. Michael didn't respond or ever see her again after that. She moved away sometime before 2007.

One frustrating thing is that it is often difficult to get information about someone until they die and a detailed obituary is published on the Internet. For example, for years I wanted to get ahold of Mrs. Burke, who lived at the corner on 50 Hill Street South, to thank her for a letter she had sent me back in 2001, congratulating me for a prize I won. But I never knew how to reach her. I suspected she might have been long-dead. It turns out she had been alive until just last summer! And yet, I only discovered this after her obituary was published.

Betty's husband inherited and then passed on a jewelry business.

1908: George Burke Senior goes into business with J.H. McCartney, with a store in Fort William called "McCartney and Burke".

1933: George Burke Senior establishes his own store, "George H. Burke Jewellers", on Cumberland Street (Betty's obituary says 1933, but the article on Dave Douglas Jewellers' closing says this was in 1936) [1]

1952: An article in the Port-Arthur News-Chronicle celebrates George Senior's 53rd anniversary in the jewelry business

1966: Betty completes the Graduate Jewellers Course. Betty was a member of the Canadian Jewellers Association.

1973: Betty and George sell the business to Dave Douglas. 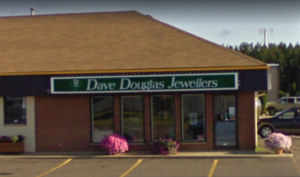 Betty was born on April 2, 1923 in Winnipeg. Manitoba. She was the eldest child of Frank and Beatrice (Graham) Hunt.

George and she returned to Port Arthur and George joined his father's business. They had three daughters, Margaret Joan (Peggy), Katherine Frances and Charlotte Clare.

Educated in Winnipeg, Betty's first job was with Canada Packers , followed by six years in the Accounting Department of the Ford Motor Company in Windsor. After her children were old enough, she helped out at George Burke Jewellers with the bookkeeping. She completed the Graduate Jewellers Course in 1966 and was a member of the Canadian Jewellers Association, becoming a certified Gemologist in 1969. After the business was sold in 1973, Betty went to work for Stille and Sutton C.A. and she earned her CGA designation in 1981.

A life long learner, Betty took advantage of the Lakehead University Senior Program and completed a B.A. with a major in Sociology.

Betty was active as a volunteer throughout her life beginning as a Girl Guide Leader during the war. She was director of the Sunday School at St Michael's Anglican Church for many years. After retirement, she sat on several boards including the Red Cross, Via Vitae Palliative Care, Thunder Bay Field Naturalists and she donated many hours to the Volunteer Income Tax Program. She also was a member of the Greenmantle Toastmistress Club.

Betty enjoyed her walks and hikes with the Thunder Bay Hiking Club and The Speed Limits. She took several walking tours in England and saw a bit of Europe and Canada on Elder Hostel tours. She put miles on the walker, that she was required to use in later life. She loved line dancing and Tai chi.

Betty is survived by her daughters, Peggy Adams, Katherine Smith ( Jim) and Charlotte Burke ( Walter Ockley), her grandchildren Richard and Keith Adams, James and Jocelyn Smith and Graham Ockley. She had eight great grandchildren Brandon, Amy and Ethan Adams, Alyssa Adams, Shamus and Kelsie Hicks and Nathaniel and Gabriella Smith. Betty is also survived by her sister, Frances Linton and brother Roderick Hunt. She was predeceased by her husband, George in 1986.

A service will be held at Sargent and Son Funeral Home, 21 N. Court Street on Thursday, July 26th at 11 a.m. with reception to follow. Visitation will be held one hour prior to the service. There will be a private interment at Riverside Cemetery.

In lieu of flowers, donations to Hospice Northwest would be greatly appreciated.

Retrieved from "https://curriepedia.mywikis.wiki/w/index.php?title=Betty_Burke&oldid=6302"
Cookies help us deliver our services. By using our services, you agree to our use of cookies.