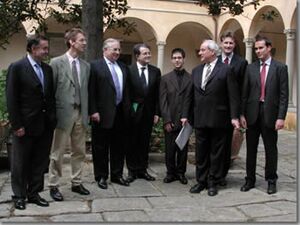 The BP/EUI Essay Contest was an essay contest on US-EU transalantic relations held in 2001, run by David J. Vogel [1], the BP Chair in Transatlantic Relations, at the Robert Schumann Centre for Advanced Studies at the European University Institute, Via dei Roccettini 9, I-51006 San Domenico di Fiesole (FI), in Italy.

It was a contest sponsored by BP [2] and the European University Institute (EUI) [3]. It was advertised in a 1-page ad in the Economist magazine, where a young Michael Currie saw the ad and was inspired to participate.

The prizes were awarded to the essay contest winners in a ceremony following the First Annual Lecture of the BP Chair in Transatlantic Relations, to be delivered by European Commission President Romano Prodi [4] on 9 May 2001 at the EUI.

"The United States must treat the European Union like an adolescent, and no longer like a child," writes Adrian Taylor, the winner of one of two €10,000 first prizes in the BP/EUI Essay Contest on the resolution and prevention of US-EU trade disputes.

Transatlantic trade disputes have arisen in a growing number of areas, argues Taylor in his prize-winning essay, including hormone-treated beef, genetically modified foods, data privacy, and tax breaks for US exporters, yet the existing tools of transatlantic diplomacy have thus far failed to resolve such disputes promptly and prevent future disputes from arising. The solution to such disputes, he says, lies not in the creation of a North Atlantic Free Trade Area, which remains politically out of reach, but rather in a series of realistic changes in the institutions of both sides. These should strive for greater integration of economic and foreign policy considerations, and a greater emphasis on negotiation rather than legal confrontation within the World Trade Organization. Above all, Taylor argues, the United States should move towards a sustained dialogue on both economic and security issues with the European Union, which should in turn take up a greater share of the burden of managing the global economy.

Taylor, at the time of the contest in 2001 a project executive at Thinktools A.G. in Zurich, was one of six prize-winners announced today by the BP Chair in Transatlantic Relations at the European University Institute in Florence, and selected by a five-person jury of eminent Europeans and Americans, headed by BP Chairman Peter Sutherland. The essay contest, which was open to Europeans and Americans of all ages, invited entrants to reflect upon the underlying causes of transatlantic economic disputes, and to propose specific mechanisms whereby the United States and the European Union might prevent future disputes from arising, and settle amicably the disputes that may occasionally arise within the transatlantic partnership. All essays were submitted to the judges anonymously, and the jury selected five prize-winners, and a sixth winner of an honorable mention prize, during a meeting in Florence on 21 April. Taylor's essay was awarded one of two €10,000 first prizes. The other, for entrants under 30, was awarded to Dirk De Bièvre [5], in 2001 a Ph.D. candidate at the European University Institute. 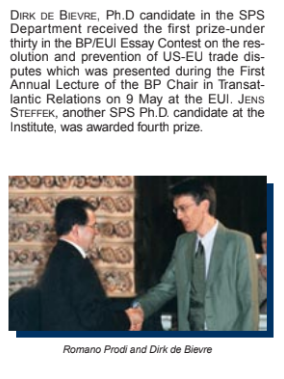 De Bièvre also reviews US-EU trade disputes over subjects such as hormone-treated beef and bananas, and argues that such disputes are an inevitable and arguably a desirable state of affairs among two close trading partners both of whom are committed to the rules of the World Trade Organization. In recent years, however, the US and EU have become mired in increasingly bitter and intractable disputes involving larger political and ethical concerns about the development, health and the environment which the WTO is not currently designed to address. De Bièvre puts forward two recommendations designed to limit the damage from such sensitive transatlantic disputes. First, he suggests that the US and EU establish ad hoc bilateral committees of EU parliamentarians, US members of Congress and experts from both parties to examine the underlying causes of specific disputes and propose negotiated solutions rather than WTO litigation. Second, he proposes that the WTO move away from its current practice of authorizing members to impose retaliatory tariffs against other members in breach of their commitments. "Retaliation," according to De Bièvre, "has proved to have all the confounding characteristics of a real weapon. As long as it is not used, it seems to entice parties into compliance, but as soon as it is actually used," as in the transatlantic beef-hormones and bananas disputes, "it proves to hurt both the user and the attacked." For this reason, he suggests that the WTO shift from its current system of authorizing punitive tariffs against offenders, to a new system in which offending countries would be obligated to offer increased market access to their trading partners.

Jury members praised both first-prize winners for their careful analysis of the underlying causes of transatlantic trade disputes, and for their pragmatic, realistic proposals for possible reforms. 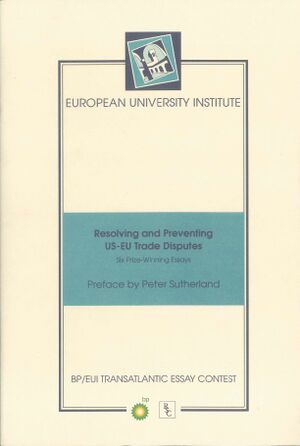 The published book of the essays

The Jury also awarded a special prize of Honorable Mention, of €1,000, to then-18-year-old Michael Currie of Thunder Bay, Ontario, whose essay proposed specific mechanisms both to settle and to prevent transatlantic trade disputes, including bilateral forums on key issues such as biotechnology, agriculture, and data privacy, and the restoration of bilateral funding to the recently suspended Transatlantic Environment Dialogue.

The BP/EUI Essay Contest Jury was chaired by Dr. Peter Sutherland [9] (1946-2018), then Chairman of BP and former Commissioner in charge of competition policy in the European Union as well as Director-General of the WTO. Other members included:

Retrieved from "https://curriepedia.mywikis.wiki/w/index.php?title=BP/EUI_Essay_Contest_2001&oldid=1844"
Cookies help us deliver our services. By using our services, you agree to our use of cookies.