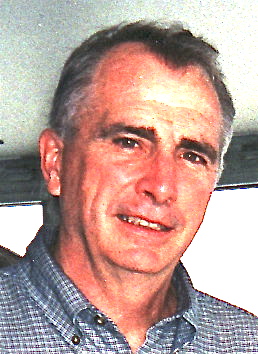 John was born to Alex Carrick on 9 June 1938. His father died in a motorcycle accident overseas in World War II when John was just a small boy.

John married Kathleen Kelly in about 1963; they were married 41 years until his death.

They had three boys:

JOHN JAY CARRICK (P ENG.) . It is with great sadness that we announce the peaceful passing of John Jay Carrick at his beloved 'Beechwood'.

He will be remembered for his devotion to his family and in particular his bride of 41 years Kathleen, his greatest love and best friend.

Though large in stature and a fierce competitor, John was a gentleman who possessed tremendous grace and was deeply respected by all who knew him for his strong faith, modesty and unfaltering integrity.

He will be missed immeasurably by Kathleen, his sons John (Jane) and Kelly (Sarah), and by his grandsons Jake, Sam, Trevor, Josh, Colton, Matthew and Scotty. John leaves behind his mother Mercie McCreary and sister Judy Wilson. John is predeceased by his father Alexander (overseas WW2), his sister Peg Rombough and beloved son Danny.

John was born June 9, 1938 in Toronto and attended Whitney Public School and Forest Hill Collegiate. His athletic accomplishments at Forest Hill continued through university where he played football for The Queen's Golden Gaels. John graduated with a mechanical engineering degree with the class of '64. That same year John started his professional career as an asphalt sales representative for Imperial Oil Ltd. This is where John met Leo McArthur (died 2016), a good friend and co-worker. In 1970 John and Leo formed McAsphalt Industries Ltd, and in 1976 they purchased Miller Paving. Today the Miller McAsphalt Group is a leader in the supply of asphalt products and road construction services, coast to coast.

For all of his accomplishments perhaps the most remarkable part of John's life was his love for family. Affectionately known as 'Bucky' by his grandsons, John was devoted to 'family fun', pond hockey, maple sugaring, fishing and cottaging. John was a supportive and fun loving uncle to his many nieces and nephews. John possessed a 'Joie de vivre' and was a man of many talents and interests. He will be remembered as a gracious host, an avid fisherman, gourmet cook, sport enthusiast and a 'proud Harley owner'. John inherited a sharp and keen wit along with a contagious sense of humour. He was generous spirited, and a loyal friend. John was a source of wisdom, comfort and strength, a mentor and inspiration to all who knew him.

The family will receive friends at Dixon-Garland Funeral Home, 166 Main St North, Markham on Thursday, June 3 between 1 and 3 p.m. and between 7 and 9 p.m. A service of celebration will be held Friday June 4th at 11:00 a.m., Stouffville United Church, 34 Church St, Stouffville with reception to follow at 'Beechwood'. The family gratefully declines flowers; a memorial donation may be made to York South Association for Community Living, 101 Edward Avenue Richmond Hill L4C 5E5 or Markham Stouffville Hospital Foundation, 381 Church St., P.O. Box 1800 Markham L3P 7P3.

Upon the death of his business partner Leo McArthur in 2016, Leo's obituary had the following passage:

"Leo and John Carrick will be preparing for a tour of the celestial highway system. Their transportation will be a 1975 CJ5 Jeep Renegade, Levi Blue Jeans Special Edition. They will be fueled by crackers, peanut butter, Myers Dark Rum, Coke and White Owl cigars. Improvements to that highway system will be forthcoming" [4]

In 2008 his company commissioned a barge, the John J. Carrick. It was pulled by a tug boat named for his business partner, Leo A. McArthur. As a unit, they form an Articulated tug barge (ATBs). "ATBs consist of a tank vessel (barge) and a large, powerful tug that is positioned in a notch in the stern of the barge, which enables the tug to propel and maneuver the barge." [1]

The barge John J. Carrick (C833236) was built by the Penglai Bohai Shipyard at Penglai, China. It was christened on July 8, 2008 and arrived Halifax, after a transpacific voyage, on Sept. 9, 2009. The trip to Canada, via the Panama Canal, covered 12,897 nautical miles. Enroute, the ship stopped at Garysville, LA, to load liquid asphalt for delivery to Dartmouth, NS.

The Leo A. McArthur/John J. Carrick are ice-strengthened and fully integrated with an Articouple mechanical linkage system. The articulated tug/barge (ATB) combination was specifically engineered and built for the transportation of asphalt and other high temperature black oil products. The barge can load a total capacity of 70,000bbls while requiring less than 6.7 meters of draft, making it one of the safest and most capable high heat ATBs in Canada.

The barge was named for the co-founder of McAsphalt and is operated by McAsphalt Marine Transportation Ltd., pushed by the tug Leo A. McArthur (ex. Victorious) from the same shipyard. The tug/barge combination had been operated as part of Upper Lakes Shipping until that company ceased operations.

Retrieved from "https://curriepedia.mywikis.wiki/w/index.php?title=John_Jay_Carrick&oldid=7657"
Cookies help us deliver our services. By using our services, you agree to our use of cookies.