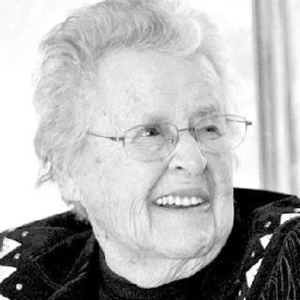 The Leonardt surname is of German and Dutch origin; from the Germanic personal name Leonhard, composed of the elements leo ‘lion’ + hard, ‘hardy’, ‘brave’, ‘strong’. [5]

Born Joan Leonhardt in Milwaukee, WI, August 18, 1924, she grew up in Louisville, KY. Her family spent summers in Sturgeon Bay, WI, and as a young woman she returned to Milwaukee to earn a nursing degree from the University of Wisconsin. She trained with the U.S. Cadet Nurse Corps.

Attracted to Colorado's ski slopes, she moved to Denver, where she worked as a nurse. It was there she met John Savage. During a trip to Europe in 1950, the pair married in Luxembourg, and then remarried in Louisville when they returned to the States because Mrs. Savage insisted on having a marriage certificate in hand and not just an entry in a foreign country's Bible.

The couple moved to Colorado's Western Slope to pursue oil shale development. They had four boys while ranching on Battlement Mesa, near Grand Valley (now Parachute), and the family moved to Rifle in 1963.

In 2000 [actually it was 1998], Mrs. Savage believed royalty owners were being shortchanged by a natural gas company [Barrett Resources, which was bought out by Williams in 2001 which inherited the lawsuit]. When she challenged the company at a public meeting, its president told her, "Joan Savage, sue us if you don't like it." She did sue. And in that year [actually it was 2006], she won a precedent-setting Supreme Court case for royalty owners. [In fact she won her case in 2006 when the Colorado State Supreme Court refused to hear the appeal of her opponent after she won in a lower court].

For 25 years, Mrs. Savage raised Arabian horses and often rode them in endurance races. For years, she also wrangled dozens of kids of family and friends who were sent to her for a ranch experience and sometimes for "rehabilitation."

Mrs. Savage was an avid world traveler. In 1967-68, when her sons were ages 8 to 17, the family of six spent a year traveling in Europe, often living in a VW van. Her last trips abroad included going to China in 2007, Germany in 2010 and Roatan [an island in the Caribbean] in 2011. She was a member of the International Women's Forum and remained connected with the River Rats, an adventuresome group of women friends from the forum. Among this group, Mrs. Savage was known as a "lioness."

For decades, she was a quiet but generous supporter of a Pennsylvania library that collects and protects Yiddish books. "These are the books that Hitler wanted to burn," she said.

Retrieved from "https://curriepedia.mywikis.wiki/w/index.php?title=Joan_Savage&oldid=7899"
Cookies help us deliver our services. By using our services, you agree to our use of cookies.