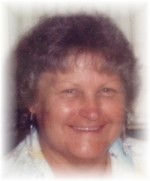 She married a Peter Brunelle, who died before 2015. Together they had one son, Pete Brunelle.

Since her obituary says she has 9 grandchildren, Pete must have had NINE children (!) with his wife Patricia Brunelle.

“Jackie” (nee LeMaistre) of Almonte, In her 80th year.

Family and Friends May Visit C. R. Gamble Funeral Home and Chapel Inc. (127 Church St., Almonte, ON., 613-256-3313) On Thursday, April 2, 2015 from 1pm to 2pm. A Memorial Service will be held in the Chapel following visiting at 2pm. The Ladies Auxiliary will have a Legion Service the same day at 12:50 pm to honour Jackie. Reception will follow Memorial Service at the Almonte Legion. Spring Inurnment. Donations may be made to the Almonte Legion - Branch 240, Almonte General Hospital Fairview Manor Foundation or Alzheimer’s Society.

Retrieved from "https://curriepedia.mywikis.wiki/w/index.php?title=Jackie_Brunelle&oldid=4206"
Cookies help us deliver our services. By using our services, you agree to our use of cookies.