Donald D.W. "Don" Watson, born (1934-09-22) 22 September 1934 (age 87), is a retired academic and volunteer board member residing in Thunder Bay, Ontario. He was a senior lecturer in mathematics in England before moving in 1967 to Lakehead University where he was Director of Computing Services until his retirement in 1996.

Don Watson was born 22 September 1934 in the United Kingdom.

Watson attended the elite Kings College School in Wimbledon, England, likely from about 1941 to 1952.

Watson read Mathematics at Brasenose College, at Oxford University, graduating 1956. He was also educated at London University; he had an early career lecturing at colleges in England. 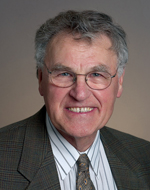 In 1967, he moved to Thunder Bay, Ontario, where he took positions at Lakehead University, including:

Since at least 1984 Watson has served on numerous community and charitable boards, including:

Watson has also written The Board Member's Companion, which he originally self-published on a website in 2004 called "www.bcompanion.com" but as of 2019 it is no longer accessible from there; it is available from Internet Archive, however. [2]

Specifics are always questionable and can never be infallible. Nevertheless, it is easier to achieve a good result by modifying specifics than by starting from generalities.

Since 1996, in retirement, he continued to serve on community boards until at least 2004, and possibly as late as 2019 or beyond.

You can never have too much perspicacity.

The Board Member's Companion

In June 2003 Volunteer Thunder Bay published a book, The Board Member's Companion, written by Watson, under ISBN 0-9733508-0-6. After further revisions, Watson published it again, this time self-publishing as a collection of 3 PDF files on a website, in September 2004.

To write this book he drew from his extensive experience on the boards of directors for not-for-profit organizations. The Board Member's Companion outlined a model that he intended to encompass all types of boards.

The ENDS Model provides a simple way of seeing all boards of all kinds as the same. It breaks the subject into components that are easy to explain. Success factors for each component can then be developed independently.

While most of these success factors support John Carver (“Boards that make a Difference”, Jossey-Bass, 1990), the differences enable the book to suit a much wider range of board types.

By adjusting parameter content, any board can be modeled. The underlined letters of the parameter titles form the acronym (“ENDS”).

— Don Watson, The Board Member's Companion

[His] experiences have provided an abundance of material on which to base his book. He likes to get things right, which is why it has taken four editions to finish the book.

How I wish I had this book when I started out as a member of my first board 30 years ago... I believe it is the best on the subject I have read.

The Board Member's Companion fills a gap in the the literature by covering the ground that a non-profit board member needs. Because it was written as a volunteer project, it may be downloaded for free by anyone, anywhere.

It is easy & enjoyable to read & understand, specific with many examples and full of useful information. Everything in it has been tested and shown to work. Earlier versions of the book had excellent reviews (click on the "Reviews" button). For information on the author (click on "Author").

The fourth edition is split into 3 parts, which may be downloaded separately as long as each part is used in its entirety:

Is a Board Orientation Guide that uses the simple ENDS model (Click on the "Ends Model" button) to explain roles and demonstrate the key factors that bring success to all boards, both large and small.

Watson married Marilyn (maiden name unknown, born 2 October, year unknown) on 11 November 1976. They appear to have had at least one child, since Watson's Facebook profile lists a granddaughter, Haley Olivia. [5]

His wife, Marilyn Watson, was also a volunteer board member, serving in 2015 as Chair of the Board of Directors of Big Brothers Big Sisters (BBBS) Orillia. [4]

[2] Blue Pages; Professionally Speaking (The Publication of the Ontario College of Teachers), December 2004 [6]

Retrieved from "https://curriepedia.mywikis.wiki/w/index.php?title=Don_Watson&oldid=6281"
Cookies help us deliver our services. By using our services, you agree to our use of cookies.